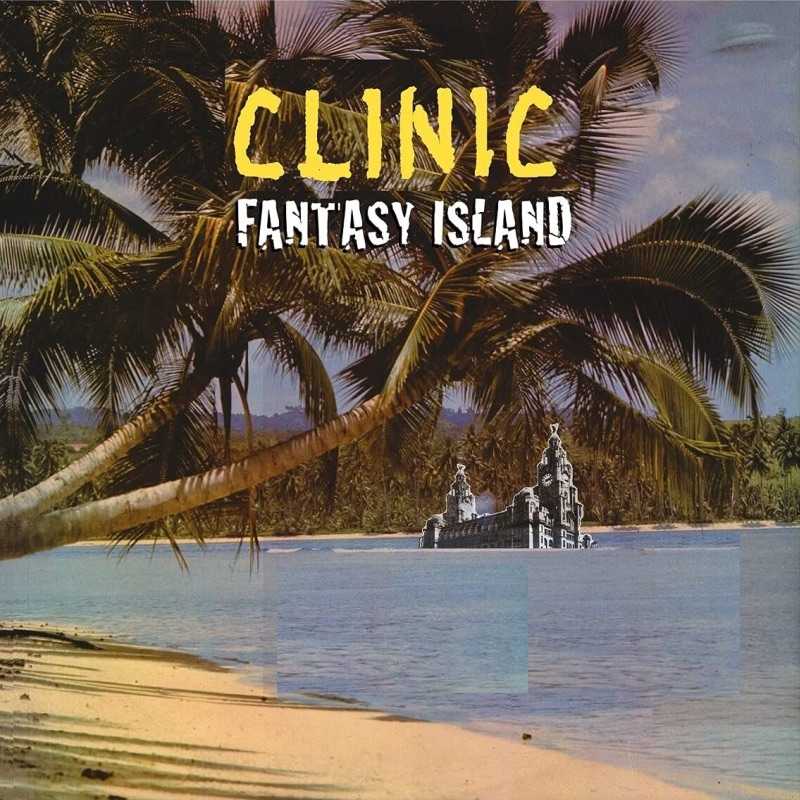 There are many positive aspects to living on an island, but there’s always something a little…odd, about their residents.

Having no neighbours can, for instance, engender a siege mentality; before you know it, you’re walking along a beach with a pitchfork threatening the occupants of a cross channel ferry.

This might seem a bit of a strange way to introduce Fantasy Island, the ninth album from Liverpudlians Clinic, but we need to talk about it first because, ladies and gentlemen, boys and girls, this is a strange gig. Picture Sgt. Turmeric’s Lonely Hearts Club Band. Or Delia Derbyshire jamming with Patrick McGoohan. Or Tattoo DJ’ing Mr. Roarke’s funeral with a playlist full of Syd Barret LPs.

OK, maybe not that weird, but in following up 2019’s satirical Wheeltappers And Shunters the group who were wearing PPE onstage twenty years before it became necessary have looked every other artist in the eye that claimed they had full control of their music and smiled underneath the fabric. This, they know, is what doing it purely for yourself sounds like.

Normally this level of conceit produces miserable, self-indulgent toss. Not so here. Fantasy Island is borderline unhinged, but its eccentricities are to be adored rather than feared.

But let’s backtrack for just a second: Clinic were formed in 1997, are now a duo led by singer Ade Blackburn, once received a Grammy nomination, and have supported Radiohead and The Flaming Lips along with having their music featured in a Weetabix commercial.

For Fantasy Island they’ve also added to their formidable collection of secondhand instruments with the introduction of, variously, an electronic acid bass machine, a 1970’s cocktail rhythm unit, a Casio digital horn and a space drum (look it up, we had to). They’ve also, they claim, taken some inspiration from 80’s cult hit wonders Kid Creole & The Coconuts, but being honest this feels like a stretch. A really, really big stretch.

Speaking of optimism, there’s a version of Ann Peebles’ I Can’t Stand The Rain here which goes to places it has no right to, but desecration or deconstruction, it’s in brilliantly unhinged company.

Opener The Lamplighter is on its best behaviour, as if trying to convince itself everything to follow is normal whilst Blackburn whispers, ‘Still clinging on/To the edge of the world’, a harmonica and waves of reverb adding to the alien vibe.

It isn’t long though before it’s business as unusual, the psychedelic disko of Fine Dining having the whispered reminder to ‘clip on your tie’, but things really unwind on Refractions (In The Rain), its distorted funk-in-cheek verses bordering on madness. ‘The heathens/The reasons/The dodecahedrons’ it goes whilst its glitterball shoots out a hypnotic sort of the weirdest, most unexpected cosmic joy.

Madness is everywhere, from On The Other Side’s weird spoken-word samples, chopped-up drums and 3 a.m. saxophone, to closer Grand Finale’s bastardisation of country and end-of-the-pier kitsch.

It’s like getting a phone call from Eccentrics-R-Us, but the title-track’s hammering keyboard vibes and light/dark strobing effect gloriously make dancing no longer optional, although you won’t want to turn round and look who’s grooving right behind you.

That’s the thing with being surrounded by nothing; your mind tends to wander. Fantasy Island is the sound of a band answering a hundred ‘what ifs?’, each barmier than the last.

This doesn’t stop it from being brilliant though; choose door one, two or three and Clinic are there ready to take you on a trip it will take a very long time to forget.