Home
Reviews
Album Review: Amyl & The Sniffers – Comfort To Me 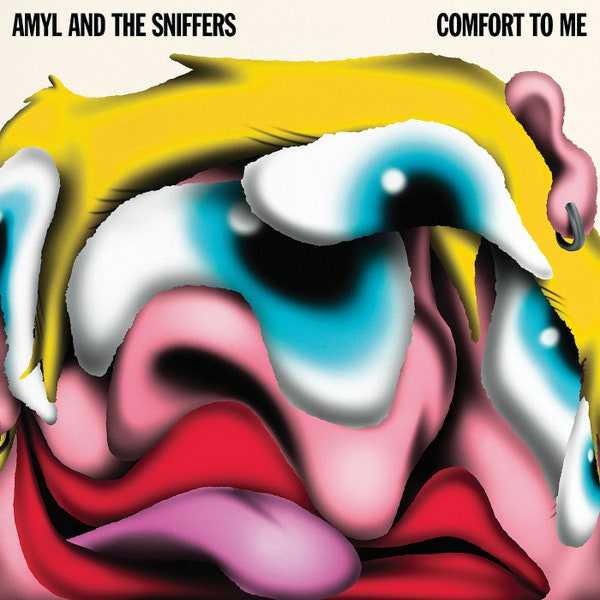 A year under house arrest with Amyl & The Sniffers’ firebrand Amy Taylor could mean anything; that’s what her and the rest of the band enjoyed in the Melbournian heat and smoke during 2020. It’s not a surprise to discover it was an emotionally chastening process, which she summed up her personal experience of with “I was like an egg going into boiling water when this started, gooey and weak but with a hard surface. I came out even harder. I’m still soft on the inside, but in a different way.”

The quartet are she claims – luckily – like a family, so sharing a house following two years of non-stop touring brought the opportunity to show off their newly honed live chops on Comfort To Me, a record influenced by bands like AC/DC, Warthog and Aussie veterans the Cosmic Psychos. This time though the days spent staring at the same walls has taken their mongrel sound – best described as a fight between The Runaways and Babes In Toyland at a barbecue – and given it a harder, darker perspective.

It doesn’t always come across that way, true. Taylor’s own brand of feminism colours everything, along with some viciously dark humour; on Security for instance, she finds herself pleading with door staff for equal treatment “You looked at normies different to me/You looked at them with trust”, her attitude literally meaning outsider, whilst on Knifey she has a simple antidote to male violence “Out comes the night, Out comes my knifey/This is how we get home nicely”.

Germaine Greer this isn’t, but the points are made succinctly. And the band’s self-assessment of their enhanced proficiency is also smart and correct; Freaks To The Front is a raucous, two note stomp imbued with West Coast hardcore muscle, Don’t Fence Me In has a crotch grabbing, eyebrow shaving guitar solo and Don’t Need A Cunt (Like You To Love Me) is potty-mouthed pub rock with the ghost of Lemmy smiling down in approval from rock n’ roll nirvana.

If this lairy obsession with being provocative has been very much the quartet’s MO to date, there are signs that what could loosely be called finesse has burrowed its way in as well. Opener Guided By Angels is expansive both lyrically and musically on their deliberately roughneck past, the mental strictures of having life controlled by authority chafing more on them than others.

Even more brain opening is Capital, a political with a small p song set in their own context, Taylor growling “Australia is burning, aye, but I’m not learning how to be more conscious/And the farmers hope for rain whilst the landscape torches”, whilst the rumble still goes on in one street or another. Meanwhile closer Snakes drives angrily at being dismissed for forgetting her roots “Worked at the IGA/Now I’m a famous cunt”.

Lockdown might’ve been a deal breaker for a band like Amyl and The Sniffers, an outfit that’s always needed to be plugged into their audience. You wondered what an extended period lacking an outlet for that fearsome pent-up energy would mean for them. But Comfort To Me builds on the parts that always made them impossible to ignore and for good measure has thrown in some mutations that promise a really hard time for someone, somewhere in the very future.

If you’re down the front row, that might just be you. But if you act like the tough part of the egg, you might not get cracked.

Tags:Amyl And The Sniffers, andy peterson