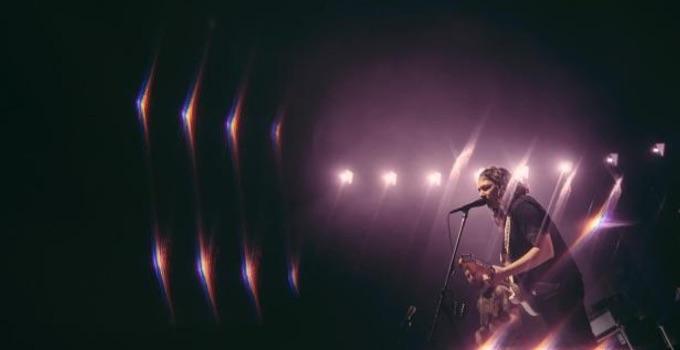 The War On Drugs by Matthias Hesch

Click here for The War On Drugs and the full list of Live4ever’s 20 albums of the year.

Valentine’s Eve 2020 at the Irish Centre in Leeds: incurable romantics are few in number here, what with The Murder Capital opening their UK tour; their intense, brooding songs mostly concerning loss, mortality and collapsing faith played to an audience twice the size of that which saw them at the city’s Brudenell Social Club only a few months before.

For the quintet, there is an appreciation of how big things can get how fast. Having already done shows in cities across Europe from Vienna to Paris, theirs is undoubtedly a star rising at a roughly similar rate to countrymen Fontaines D.C., a curve on which they’re about twelve months behind.

The sold out tour finishes in Liverpool twelve days later. They haven’t played on British soil since.

We know why, of course. And almost everyone, from all walks of life, has been impacted by the Coronavirus pandemic in some way or another.

Ironically, one of the first cluster of cases were those in a Yorkshire choir from which a member’s partner had returned from the Wuhan area of China as far back as December 2019, but it would be months until infections rose to the point that a national lockdown was imposed in March, at the same time banning all large indoor gatherings and bringing to a halt live music across the country.

All at once, Britain fell silent.

It’s worth at this point setting some context here: the UK’s live music industry has undergone a dazzling renaissance in the last ten years or so, giving rise to the idea of ‘music tourism’ both at home and in Europe. Many venues have been upgraded or opened new during this period, and the number of performers seems to have increased to fill them; in most cities, it had become possible if you had the constitution to see a gig every night.

As a consequence of this growth in popularity, its value to the economy grew to around £6bn a year and the number of people it employed to around 200,000, not including the spin-off benefits in money spent on transport, hospitality and accommodation.

And yet musicians and crews were not well paid, with average earnings of about £28,000 a year (less for those backstage where the UK’s average salary is £7000 a year more). Add to this the fact that jobs in the sector tend to be more short term with less security, and the incentives for carrying on during times of extreme financial hardship were hard to find.

One by one things on the calendar started to disappear or be pushed back. Personally, first up were Real Estate, cancelling their entire tour, followed by Squarepusher who rearranged to a date in the autumn. Live At Leeds also postponed, as did Cigarettes After Sex, who then cancelled. New Order’s gig in October – which seemed so far away – was delayed almost twelve months. Nick Cave six. Teenage Fanclub also postponed. Schedules went blank.

Faced with hard choices and their major source of income in the streaming era drying up, many artists innovated. Home studios were hastily rigged up. Livestreamed performances, initially for free and sometimes from bedrooms, front rooms, or sheds, began to fill the vacuum.

But whilst there was a new normal there, the venues they played in were suffering the sort of economic paralysis which is usually terminal; the furlough scheme helped some, whilst a deferral in business rates also provided a little further leeway, but the chance of permanent closure became very real. Again, the clever people who ran them upped their games, diversifying, building links with local communities and partnering with other businesses in the same boat.

Direct government help though was almost criminally slow in arriving. It wasn’t until July, several weeks after lockdown restrictions had been eased, that they announced a £1.5bn Cultural Recovery Fund, to be shared across the arts as a means of sustaining them. Even then the scale of some of the payments were difficult to reconcile, as London nightclub Ministry Of Sound received a grant totaling £950,000 whilst many other smaller venues across the country were not so lucky.

Options for us as music fans are many and easy enough; we live in a world where we can stream whatever we want from wherever we want. For those making the art however, the pandemic has only widened the pre-existing disparities of the 21st century’s royalty model, as digital platforms like Spotify and labels have benefited from a more captive audience whilst content creators have been further marginalised by shameless profiteering.

Some have lobbied the government recently to tackle the issue of pitiful outpayment levels, but given that these are foreign owned private businesses, a swift improvement in terms seems unlikely.

The absence of concerts for those who regularly attend, especially at grass-roots level, has deprived artists and audiences alike of a connection based on reciprocity: as a punter you can go to a great gig, or a terrible gig, but very rarely an average one. At a small venue when the headline act darts from the toilet/dressing room to the stage in three paces and is then confronted with a couple of hundred faces staring back at just about eye level, there’s nowhere to hide; here as a musician is where you learn your craft, with a handful of successful graduates transitioning into the 2,000 seaters and beyond.

It seems, given all this, that releasing a live album, especially one that wasn’t to make everyone feel even more disconnected and pissed off, would be impossible. And yet, The War On Drugs’ LIVE DRUGS is a reminder of all the good things about gigs we love; songs thrillingly reimagined, this euphoria extending to the singer, the endorphin rush of familiar opening chords, the pooled ecstasy in just a key change.

LIVE DRUGS amplified the things we cherished about the spectacle, instead of making us regret its loss more. It is, of course, just a stepping-stone towards the place the public wants to return to. 2020 has left everyone exhausted, biological prohibition having devastated the livelihoods and mental health of so many of the people we love.

For now however, there’s what we’ve always had – hope.

Tags:andy peterson, the war on drugs