Home
Live
‘Comfort is not on the menu, naked emotion and catharsis is’ – The Murder Capital live at The Exchange, Bristol 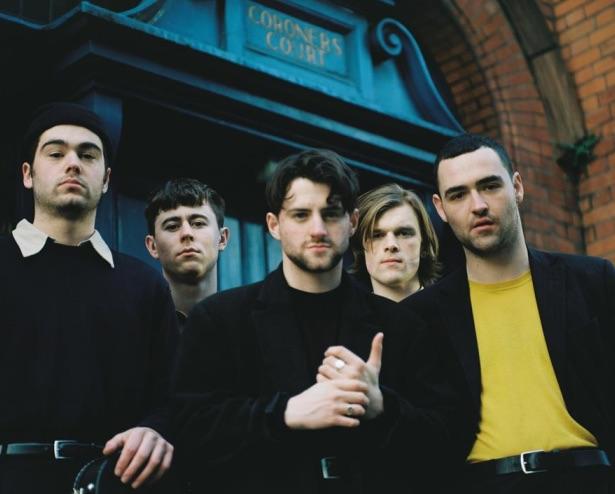 The idea of a band being a gang is the one of the oldest principles in music.

In the past it was outlined by literal uniformity; think The Beatles in their Nehru jackets, or the chain gang aesthetic of punk. The compulsory dress code isn’t so prevalent nowadays, but the gang mentality is still hearteningly rife.

Whilst generally dressed as if they come from different bands, The Murder Capital appear to have a ritual of locking foreheads in what is found to be an aggressive action in pubs and clubs throughout the land (and much like Pete ‘n’ Carl did back in the day), but tonight (7th October) is a telling insight into their intensity.

Before that, each member slowly takes to the stage as if participants in the Royal Rumble, with deafening feedback as their entrance music. Bassist Gabriel Paschal Byrne is the pick of the lot; he smiles evilly and manically at the crowd, playing the lead henchman to singer James McGovern’s mob boss. It comes across as pure calculated theatre and appears slightly misleading initially, but all drama is justified once the music starts: as each song kicks, each member of the quintet looks like they have been electrocuted, all flailing limbs and saliva.

Every member of the band plays their part. Guitarists Damien Tuite and Cathal Roper go back and forth across the stage to work in symbiosis as Byrne bobs up and down like he’s underwater. Drummer Diarmiud Brennan holds everything together, his non-stop tribal drumming a show of its own.

McGovern is determined to keep the spotlight on him, even during the early 80s, U2-esque Slowdance II which as a pure instrumental has no requirement for his services. Nevertheless he stands completely still, eyes closed and lost in the music. He’s also a fine example of that most unheralded of musicians: the tambourine player. Never overstated or unnecessary, he hits the marks perfectly as he presumably does on the record.

The band’s industrial post-punk vignettes lend themselves well to such dramatics. McGovern half sings, half barks the choruses to openers More Is Less and Don’t Cling To Life, but later On Twisted Ground is delivered with a grace that is almost hymnal, the venue shrouded in darkness. As the song concludes McGovern’s weeps into the microphone reach an almost uncomfortable length, but that surely is the point. Comfort is not on the menu tonight, naked emotion and catharsis is.

Overly-dramatic perhaps, but nothing less than compelling.