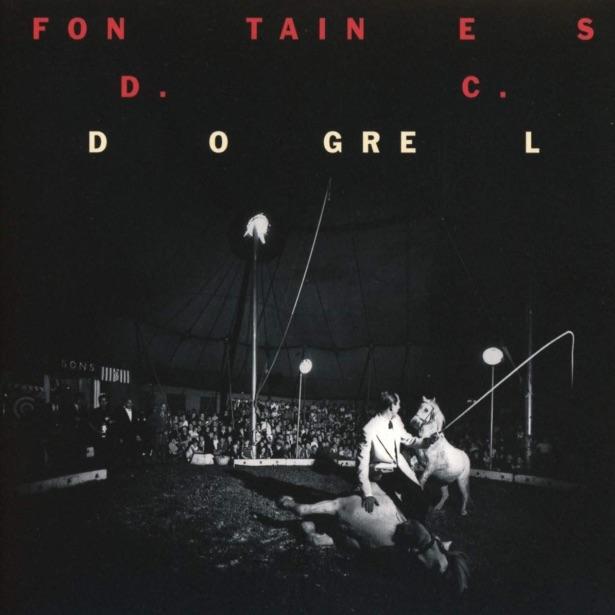 An odd but encouraging footnote of this post-Sleaford Mods era has been the emergence of a raft of new voices consciously avoiding the hype cycle; whilst the likes of Shame and Idles have both taken time to mature from humbler beginnings, neither has been willing to scale the ladders of ambition if paradoxically it risks the snakes of compromise.

Fontaines D.C. have had the luxury of growing up distanced from the music industry’s London-centric petri dish; loosely part of an emerging crop of noisemakers that includes The Murder Capital and Crows, their muse has been a rapidly changing Dublin home, a landscape ever more filled with unwanted infiltrators, the bourgeoisie and the bulldozer.

Consciously a little disconnected, part of what the quintet do best is in the questions they don’t answer. Lazy comparisons about their music are easy to make, like thinking Shane MacGowan betrothed to The Fall, but Dogrel doesn’t so much erase those myths the band ignore but enrich them, a craven sonic rebuttal for pigeonholers and hot take mavericks alike. Let us not forget after all that The Pogues in their original glory were refugees inside a Britain still looking out towards the world, a situation we now find inverted. In this new world of ego and power tripping, for Fontaines lead singer Grian Chatten the now decaying threads of imperialism are just one of a number he revels in brazenly pulling.

Are they punks? Are they indie? Are they crafty sons of a city being erased before them? Yes to all. Opener Big is anti-ambition, Chatten growling, “My childhood was small/But I’m gonna be big” like that was a pair of boots waiting to be filled. Effortlessly they transition into the playground, the knockabout strut of Sha Sha Sha taking on all comers while on Roy’s Tune, Chatten is almost singing and the melody is almost pretty, the way people sometimes hear something different to the person next to them, but this time the blanket covers everyone, like a mass hypnosis of good.

It’s sleight of mind however, because this shallowness of good feeling isn’t Dogrel’s true intent, rather a prelude to help make us grasp its heaving sense of anger and romance, remorse for watching a city fall under the marching heels of progress and the contempt for those with mind tattoos of the reasons why.

On Hurricane Laughter they sprawl out over nearly five minutes of furious, of diabolical, head smashing bass and unfiltered mania, Chatten at his twisted psalms and coming in and out of focus and spotlights and CCTV and wires and sweating existential dread. It’s not a statement of intent, it’s not a statement, it’s something else, deeper and further into the sinew of his situation, a cultural autopsy a child of his age should never want to see. It’s magnificent.

It may lock in, however this is palpably not a groove band, but ones who still don’t fully understand their own weapons. The price of admission is only authenticity, the sin of selfies and living for likes exposed on Chequeless Reckless, Chatten passing judgment, “Charisma is exquisite manipulation and money…is the sandpit of the soul.” After it you’re forced to wonder if anyone is safe. And why should they be?

Dogrel closes with Dublin City Sky, a rolling shanty as close to anything MacGowan has ever growled out, two sets of misty eyes scraping themselves up from horizons which will soon be no more, if they ever even were. Both are windows onto the souls of geniuses flawed but Fontaines D.C., via this brilliant slash of poetic trauma, seem to have got the rest of it all figured out, a band tied to the apron strings of a city which once made fortunes and sheltered paupers.

Let their conscience always be our guide.