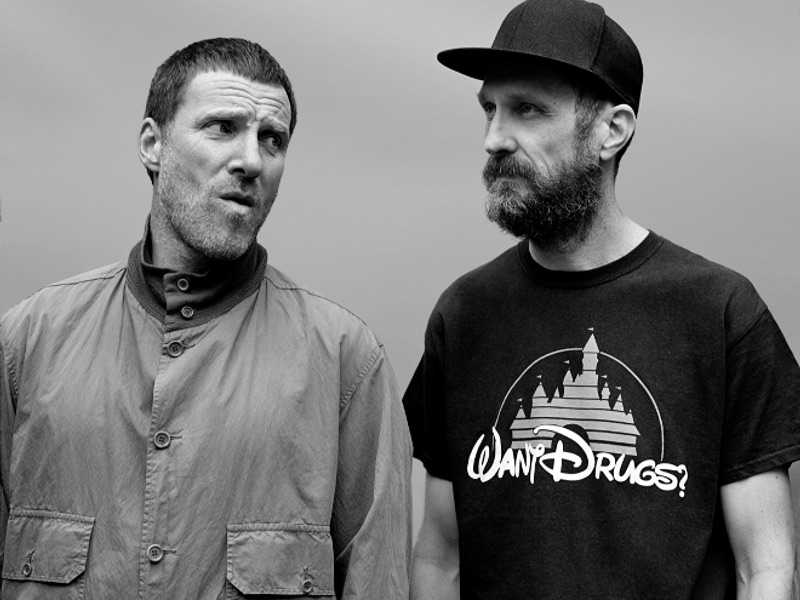 Fifteen years ago, the very notion of a Sleaford Mods gig would have been dismissed.

Two middle-aged men – one who simply presses play on his laptop as the other shouts tirades into his mic, railing against the issues of the world that irk and enrage him – is a tough sell. Even writing it down, the concept seems laughable (and it also makes them incredibly difficult to review, so please bear that in mind as you read on).

A decade on, you either get it or you don’t, but increasingly more people are getting it. Their latest and eleventh album, Spare Ribs, cracked the Top 5 of the UK chart this year, and the duo arrive in Bristol a few days after an arena gig in their native Nottingham.

Of course, we operate in a very different society than that of 2007 (the year in which Sleaford Mods released their debut album). This was pre-financial crash, pre-Brexit, pre-COVID, and there was (seemingly) much less to rail against.

Which poses a question: we now have the evidence that the duo were unquestionably ahead of their time (with their fundamental approach having changed little), but does genius lie beneath the angry, knowingly-difficult-yet-carefree veneer? It can’t be dismissed as something for the youth, with the average age of those in attendance being the wrong side of 40, many probably feeling that Jason Williamson speaks on their behalf.

A 23-song set commences gently with the subtle Fishcakes from Spare Ribs, but it’s a red herring as the rest of the set comprises skull-knocking intensity at various BPMs.

Shortcummings follows, with Williamson channeling more anger live than on record, spitting into the mic with venom, pacing back and forth around the stage (their set-up, extravagant for them, comprises white curtains shielding large lights). As throughout the whole set, Andrew Fearn loses himself in their dance-punk, grooving awa, almost unaware of the audience.

What’s perhaps most remarkable about the hefty set is that while it’s largely variations of the same sound, little sounds similar. Shrewdly, those that do are sequenced next to one another; the shuffling Jolly Fucker follows the equally loose Face To Faces, for example. Yet by and large it’s bass-powered electro fare that requires controlled, disciplined movement rather than traditional dancing.

Which leaves Williamson to provide the spectacle, which he achieves in his own inimitable way. While constantly moving, he seems to be holding himself back from ‘performing’ (although there is some unashamed dad dancing), but his power comes through the largely monotone vocal delivery of the lyrics. The only concession to theatricality come from his frequent squawks, as random and apparently inconsequential as they are.

Williamson’s lyrics tap into the repressed elements of the human consciousness which society dictates should remained smothered, yet while there is bitterness and frustration there’s no malice.

All objects of his fury – from New Labour to the Tories to the rest of the music industry – are all treated with equal, largely justifiable contempt. The sheer pleasure he clearly gets from delivering the frequent ‘fuck-offs’ within the music surely speak for many.

Yet Williamson is clearly a feminist, either when telling the crowd to respect women (‘this groping thing, it’s fooking dark’) or his continued support for Billy Nomates, who receives a rapturous response when she sidles on stage for Monk N Mindy.

Two disparate units who come together to create a stark, brutal but beautiful noise continue to defy everything and everyone.

As the UK continues to pursue a less than enticing future, Sleaford Mods have evolved from being out-of-step to leading the march, and are needed more than even they know.