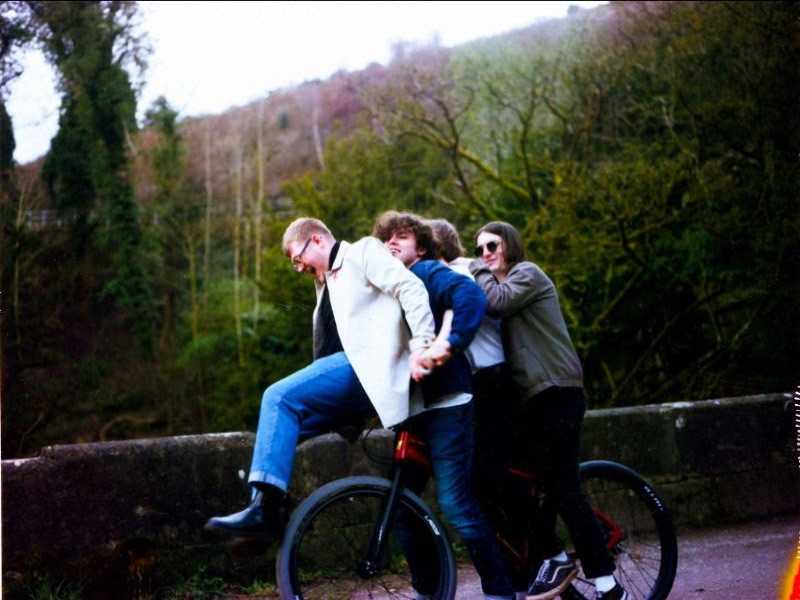 The Lathums by Ewan Ogden

Hyperbole is a huge part of the music business; how many times have music fans been promised a ‘band that will change your life’ or that said band are ‘the best since the Beatles/Bowie/Smiths/Oasis’ etc?

Overblown praise and expectation is such a part of the process that a healthy immunity and scepticism has been built up because of it. Yet every now and again, a band delivers.

For fans of British indie, the examples are increasingly few and far between, the phenomenal rise of the Arctic Monkeys being the most recent example of a band who delivered on their potential and word-of-mouth hype.

Finally, a decade-and-a-half on, we have a truly worthy new act upon which hopes can be pinned. The expectation around The Lathums, heroes of Wigan, is nearly fit to burst as they ready the release of their debut album How Beautiful Life Can Be in a few short weeks, to be followed by an extensive and nearly-sold-out autumn/winter UK tour.

Not that Alex Moore, singer and lead songwriter, is letting any pressure get to him: “I’m a bit of a hermit in some ways. I try and keep my head down and focus on what I need to do. The odd things I do see, people are always praising us and being really supportive, so that always makes me smile.”

Unquestionably a healthy attitude. When Live4ever spoke to Moore recently he projected neither fear nor anticipation, his feet firmly on the ground when discussing what will be a very busy few months:

“It feels good. It’s not really sunk in yet as we haven’t really played any gigs or anything but we’re all just excited to get back on the road. Obviously the industry’s not been able to carry on for the past 18 months, so it’s good to get back into it.“

At the time of our chat The Lathums had a handful of 2021 shows under their belt, including an emotional gig at London’s Omeara (“It was brilliant. Amazing. People were louder than me.”) with some festival shows in the pipeline.

Given they are such a hot property, it seems strange that they had only been booked for a couple of festivals when surely agents must have been banging down their door? Moore confirms that this was purely circumstantial:

Back in 2019, The Lathums were building up quite a head of steam but the lockdown virtually stopped them in their tracks. Fortunately, it doesn’t seem to have overly affected their momentum, and even possibly worked in their favour. “I had a lot of time to write and try to understand things for a little bit,” Moore explains, with the album’s title a reaction to the positives in life, even when things seemed very dark.

The recording of the album took place during lockdown with The Coral’s James Skelly on production duties. “We did the whole album with him,”Moore tells us. “He has experience, so when we were doing the first album we weren’t sure how it went down in the studio, the professional side of it.”

“We were just used to me writing and then playing them live in pubs. So there was a big…maybe not a barrier, but a different part of our job that we needed to learn about. That helped us.”

Having released several singles and EPs over the last few years, The Lathums already had a healthy catalogue of songs to choose from. Sadly, but necessarily, some didn’t make the cut: “There was a good few, to be fair. I don’t really want to name any in case they end up popping about at a later stage. But there was a few that made me a bit sad (to not include), but it’s all meant to be I suppose.”

On the other hand some tracks, such as fan favourite The Great Escape, were given a re-evaluation, as Moore explains: “We just felt that they had a lot of life left in them, even for existing fans. Hopefully when we get a new fanbase from the album, people who have never heard us before, they will have missed out on songs that got people talking about us in the first place. We felt it deserved another looking at.”

Although they have been plying their trade for some time and have an unerring ability to harness their fans’ emotions, Alex Moore appears to have a natural ability which only realised itself at a relatively late stage.

“I was a late bloomer,” he says. “In terms of when people get into music, they’re quite young and it’s something they stumble upon through their families. My mum and dad got me a guitar when I was 14.”

“I kind of dabbled with it for a little bit but I shied away from it because I was just finishing high school. I didn’t really have the drive and left it for a bit. Then I joined a music college when I was 16 and that spurred me on more.”

“I got a bit more confidence from it and drive, so I was happy to do it.” Then he met his bandmates, who galvanised the young singer: “I don’t think it changed the way I look at things, but there was definitely much more expression. Scott’s very expressive on the guitar and the melodies that he writes. That was the biggest thing.”

Like all the greats, Moore’s lyrics come from a place of truth. “There’s never any set method, but a lot of the songs come from my own experiences and thoughts,” he reveals.

Similarly, his unique vocal style is all his own: “I don’t think there is anything (that influences it), really. I try to keep things as original as I possibly can and try not to be influenced by anything. I just do what feels right and what comes to me.”

Following a support slot with Blossoms on their forthcoming tour, The Lathums will then be making up for lost time with their own headline shows. Now they have the luxury of a plethora of songs to choose from, what effect does that have on the setlist?

“We’ve got the set where we need it to be, at the moment. Obviously we’ve not played live in so long so we always base the setlist off people’s emotions and the atmosphere changes. We learnt things as we went along. We’ve done the best we can so far, but I feel like the setlist will evolve in its own way.”

With such a packed itinerary, the band could be forgiven for resting on their laurels when it comes to new music, yet from Moore’s veiled but considered answer to the question, can it be presumed that new material may arrive sooner than expected?

“Because we had such a backlog of songs….a lot made the album, but I had a backlog of songs before we recorded the album. There’s so many songs….we’ve been in the studio a couple of times, when we can, and recorded a few other songs, just so we have them in a recorded setting.”

There’s so many songs flying about that I need to be able to quantify it almost. I can’t do that if they’re just in my head. If we wanted to, we could release album two, three, maybe four. I don’t think Island would be very happy about that!”

Probably not, but it’s not just about keeping their label happy. Recently, upon the release of a special vinyl edition of How Beautiful Life Can Be, The Lathums earned acclaim for acting fast when the records made their way into the hands of online touts, immediately refunding them and nipping the issue in the bud.

“I didn’t even know that was a thing,” Moore says. “I’m not used to this culture, so I had no idea that’s something that happens.”

Tellingly, and hearteningly, this is the most animated Moore becomes during our conversation. “I hate it. It’s like cheating our fans. Why would you do it? Why would you try and make money off other people’s happiness? I don’t know much about it, but there’s a thing now where people buy something and sell it on, you can find out and refund the vinyl, CD, tickets or whatever it is.”

“That happened a couple of times, and obviously we got wiser. Some people try to make sure none of our stuff is affordable. We put something out for a tenner, then we check eBay and people are selling it for £200. It’s not right. It’s cheating people, I don’t like it. Somebody would really love that, but they’re being extorted by another human being. It’s wrong.“

“One gets the sense that, no matter how many fans they will eventually get (and it will be lots), their loyalty will always be the most important thing to Moore and his band-mates.

“The support we get off people is natural and organic. The community we’ve built from the band is really reassuring, that people are behind us and supporting us. We can be a bit more confident and be ourselves. Not worrying about forcing things, people will follow us naturally along the journey.”

If the first steps on the journey are anything to go by, then the next stage will be – to borrow Moore’s tendency to understate – eventful at least. Watch them fly.

The Lathums release How Beautiful Life Can Be on September 24th