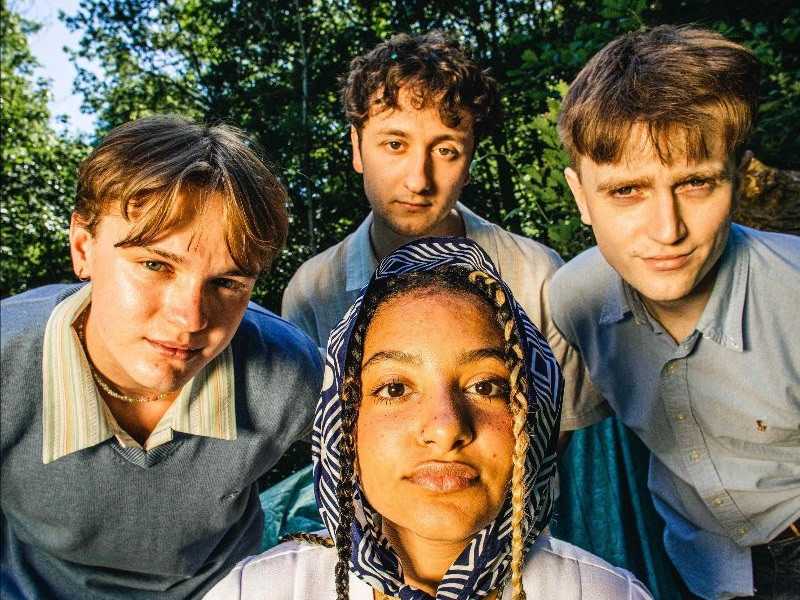 We have me (Lily) on vocals, synth and rhythm guitar. Lewis on lead, Douglas on drums and Nick on bass.

We’re from all over the country, but English Teacher formed and finds home in Leeds.

Shame; Fat White Family; Black Country, New Road; Sorry; Blur and Sonic Youth are universally appreciated by the band. I get a lot of my lyrical approach from poetry/literature, and artists like Alex Turner and Tyler, The Creator.

We met at uni in Leeds; the boys’ old band had recently retired due to their singer leaving, so I asked them to play with me instead.

We all studied at Leeds Conservatoire and currently work. I’m a writer and label assistant, Douglas is a carer, Lewis is a waiter and Nick is a function musician. I’m also in the Leeds band Eades and I used to be a function musician amongst various other things.

Douglas was in a band called Toffees back in the day and is currently in Leeds’ Spearmint Tongues with Lewis, and DRAAGS with Nick. We’ve all had the classic hospitality, hometown bands and music degree history.

We’re somewhere in the indie/alternative/post-rock/art-punk scene…I think? We just make noises we like.

Lewis once took a week off school to go watch The Script with his Mum.

We just want to play as many shows as possible, in as many cities, countries and galaxies as we’re allowed to. We’re also recording in August – so keep your eyes, ears and hearts open.

The band continued to play as Titanic sank.

We all know the story. That no-one could later quite agree on what was actually being played as the ship succumbed to the icy waters of the Atlantic is by the by really.

English Teacher have settled on ‘Nearer, My God, To Thee’, as most do. Its interlude is just one of the many impressively assured touches to their new single Wallace; named for Wallace Hartley, leader of said band and apparently something of a folk hero in the hometown he shares with Lily Fontaine.

They see parallels in the futility of Hartley’s last moments, and its later veneration, with the political direction that hometown has found itself heading in since the Brexit vote in 2016. Wallace tells that story with a wide lens and exasperated but charming unpredictability.

The confidence on display ensures there’s no mistaking what’s at play here.