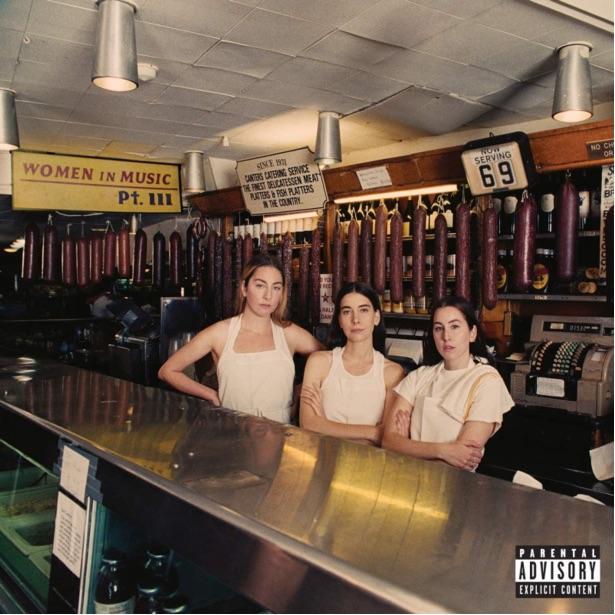 For instance, are HAIM a rock band sometimes playing pop, or vice versa? The answer is far more nuanced, as Women In Music Pt. III illustrates; an album on which the trio of Californian siblings follow the emerging twenties’ trend of artists pleasing themselves first and everyone else later.

Following on from 2017’s Something To Tell You – and co-produced by Danielle and two of the group’s long time collaborators, Ariel Rechtshaid and former Vampire Weekender Rostam Batmanglij – there’s a, to be expected, polish and maturity here, but the girls are pushing back at some familiar topics: Man From The Magazine deals openly with an early interview in which bass player Este was asked if she made her characteristic onstage faces in bed, while I Know Alone explores the feelings of emptiness which flood in when tour camaraderie fades to missed calls and silent rooms.

Wise beyond their years, the sisters are happy to embrace these subjects with an admirable candidness, but equally are not overwhelmed by them. At a time when there seems to be only two responses to the world around – fatalism or despair – they bow to neither. Opener Los Angeles kicks off with a ludicrous sax break before whipped snare and a skeletal afrobeat riff soup up the idea of leaving their hometown, while 3 AM is a bubbly 90’s R&B sketch, booty calls and all. On Another Try, they take the time hopping a step further, strapping themselves unashamedly to Ace Of Base’s cheese-laden classic All That She Wants, and for all the wrong reasons the payoff is handsome.

If anything, there’s a pervasive sense of laissez faire, of freedom, as well as a celebration of relationships, both being remade and also maintained under modernist pressure. On The Steps, a tentative hand is extended in the direction of the guitar, an instrument which by being given a squawking honky tonk workout is granted a renewed sense of meaning within their writing.

Elsewhere, the bonds are far more human: on Summer Girl, the enthusiastic skeleton of which comes from Lou Reed’s A Walk On The Wild Side with its airy brass and looping kick drum, words explore the moments in which Danielle was a long distance angel for Rechtshaid following his diagnosis and treatment for testicular cancer (he’s now in remission). But perhaps the most effective demonstration of unity is on the simply gorgeous Hallelujah, written about the loss of Alana’s best friend in a car accident, the harmonies as close knit and interwoven as the bonds which restore everyone to something like normality after dehumanising grief.

Mindful, speaking from the heart, but fun, Women In Music Pt. III avoids the trap of playing out like an intrusion on an impromptu family singalong. HAIM are proudly still in an odd place, but it’s theirs, and let no-one try and take it away from them.