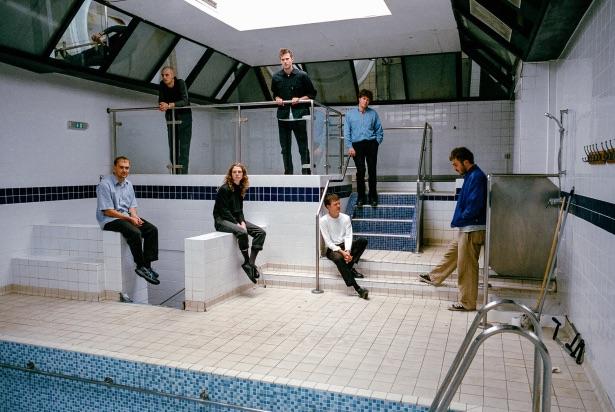 “We see caroline as being ‘systems-based’ music in the way that all the musical parts are mutually interdependent and none are expendable,” the band say. “This video shows a city and explores how, with it’s similarly interconnected roads, tracks, tunnels and rivers, it shares something with this characteristic of our music and of this song in particular. A city’s architectural features, and the ways that they coexist with each other, became analogies for the musical parts that knot together in ‘Dark blue’.”

“We have developed this video in parallel with the escalating COVID-19 situation and the influence of the crisis on the editing process has been inevitable. Central features of the video have taken on a new significance in light of this. The video shows a city that could be a lot of places in the world right now – the lights are on, the city is being powered, but it’s inhabitants are hidden.”

“It shows skyscrapers that sit, ominously frozen, waiting to be reactivated. The video tries to animate these buildings beyond their status as symbols of global finance, gradually deconstructing them into basic shapes and distorting the light from their windows into new patterns. The buildings are animate and persist, regardless of human presence.”