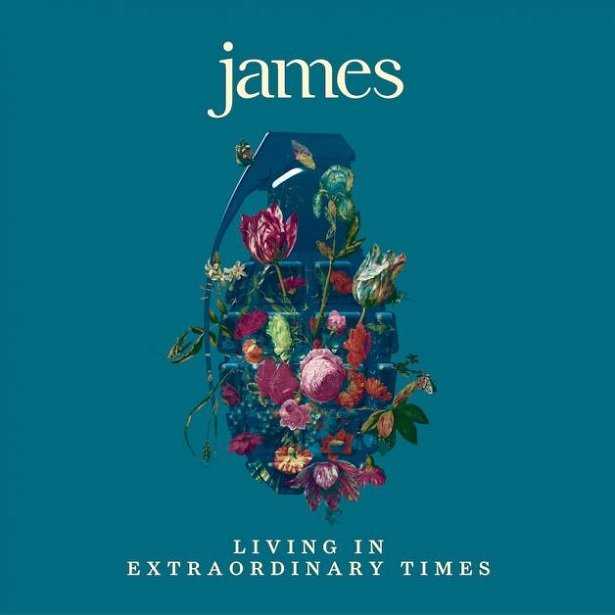 An initiative which BPI supremo Jeff Taylor said underlined, ‘the concept of the album as a body of work that expresses a narrative or an artist’s creative vision…remains as relevant and inspiring as ever’, the pros and cons were soon publicly being weighed up.

Those arguing with Taylor might point out that any attempt to breathe life into the album in this age of streaming and playlists simply represents another way to flog the same dead, multi-formatted horse, but if you look hard there are still just about enough performers to make his idea partially true – and James are undoubtedly one of them.

This being true, the neutral observer might claim both media and band are still locked in a constant battle for continued relevancy, not least when the latter in their earliest incarnations were contemporaries of Yazoo and The Teardrop Explodes.

Defiant, their answer came first earlier this year with the release of the Better Than That EP, and the response is now completed with Living In Extraordinary Times, their 15th album and one that represents another chapter in a career followed by a devotional army of fans.

Produced by Charlie Andrew (alt-j, Wolf Alice), from the first moments of bombastic opener Hank it’s clear that no ground is marked safe from lead singer Tim Booth’s all seeing perspective as he needles “white fascists in the White House” giving “NRA high fives”. Booth renders his charged words in distortion as if through a megaphone whilst the spattering drums and fiery brass condemn their target to a fate we can only hope will not befall the rest of us.

Longer standing acolytes may find this more abrasive edge a little uncomfortable at first, but those who value Booth’s love of intimacy will feel more blessed by How Hard The Way, the mirror of life – an affliction here – held up so close to himself that the image blurs to indistinct. Normally a soul so free of guilt, Coming Home Part 2 has the singer wringing his hands as technology proves no substitute for fatherhood, a rare moment here of tenderness amongst the rubble.

At times there’s almost too much going on, mind-dumps in overload as the material traverses one modern chasm to the next; in a time when masculinity is ill at ease with itself to confess weakness is heresy, only for this to be flipped on the title track, the opening line “F*ck you, I Wanna F*ck you, Until We Break Through” not the sort of proposal it first seems.

We Live In Extraordinary Times has these moments of direct connection between you and him, but they’re rarer than in works past, less benevolent than before, and perhaps deliberately it contains few songs that could in the divided pop world of now be potential hits.

Radio-unfriendliness aside, the best moments come through experimentation, particularly the thudding early-New Order syntax of Picture Of This Place, while on closer What’s It All About the spotlight flips wildly from reason to the edge and back, an epic that ends by a roadside somewhere, anywhere, the signposts only ones the id can write.

People have been declaring the death of the album now for more than 20 years and yet it stubbornly remains, maybe because of the older buying demographic who’ve fuelled vinyl’s renaissance, but partly because experiences like that served up on We Live In Extraordinary Times are what the long playing format was made for.

Veterans cleverly using its breadth and contours to send listeners on an old fashioned journey, Tim Booth and co. have made the case for a type of listening this century has all but condemned to nothingness.