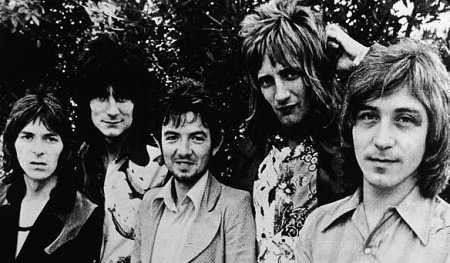 Rod Stewart, Ronnie Wood and Kenney Jones were reunited onstage as the Faces for the first time in four decades last weekend as part of the third annual Rock ‘n’ Horsepower charity concert in Surrey.

Co-organised by Stewart and Jones in aid of Prostate Cancer UK, Saturday night’s (September 5th) gig saw the band revisit the huge singles which catapulted the post-Small Faces band from its mod origins to stadium-sized superstadom in the seventies. These included ‘Stay With Me‘ and ‘Ooh La La‘ – the latter co-written by the dearly departed Ronnie Lane. Some fan footage has been posted online and can be seen below.

“This year is the 40th anniversary since The Faces parted ways so it’s about time we got together for a jam,” Rod Stewart said when the reunion was announced last month.

“Being in The Faces back in the day was a whirlwind of madness but my God, it was beyond brilliant. We are pleased to be able to support Prostate Cancer UK.”