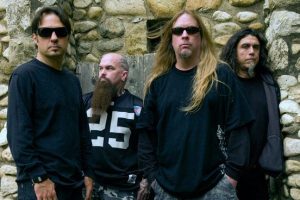 The band released a short tribute on their official website which reads: ‘Our Brother Jeff Hanneman, May He Rest In Peace (1964 – 2013)’, while a statement on Facebook adds:

“Slayer is devastated to inform that their bandmate and brother, Jeff Hanneman, passed away at about 11am this morning near his Southern California home.”

Many musicians, especially from the US’ rock community, have been quick to pay their tributes to Hanneman. Amongst those is singer Andrew WK who remarks: “Jeff Hanneman will always be a metal god. A true master, he gave energy and excitement to millions, and will continue to.”

Hanneman had been in serious ill health since 2011 when he developed a flesh eating disease after being bitten by a spider. The band recently revealed the guitarist had been able to attend rehearsals for a planned European tour, but it is not known if those dates will now go ahead after this sad news.