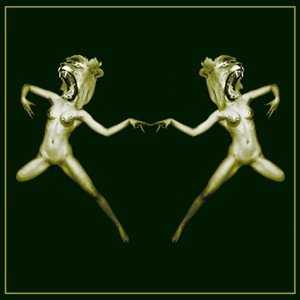 The best thing about being a music lover is that you find yourself taken by surprise all the time.

It’s a wonderful feeling, bumping into new sounds that don’t make you want to saw your ears off. But you knew that. What else would you be doing here? Finding out who the hell Beth Jeans Houghton is, perhaps. Very well. Beth Jeans Houghton is the aforementioned feeling, magnified times a thousand and multiplied by the square root of insanity.

Beth Jeans Houghton was born in Transylvania to a pack of albino wolves who raised her on chewing tobacco and stuffed clams. That’s what her official biography says, and that’s exactly the kind of nonsense we can get behind. It’s the best indication of what you’re in for without actually listening to her stuff.

Well. Their stuff, really. Formerly a solo act, Houghton has since recruited a manic band of multi-instrumentalists she likes to call The Hooves of Destiny. Dav Shiel drums and sings and works other strange implements. Rory Gibson does things with a bass guitar and he sings too. Findlay Macaskill is down for violin, vocals and eyebrows; Blazey Blazey makes those glorious trumpet and guitar noises. If you can spot who does what where on this record, you’re either lying or you’re the sound engineer.

If, by any remote chance, you have already heard something of Houghton and the Hooves, chances are it’ll be the recent single, ‘Sweet Tooth Bird‘. That suits our purposes just fine; it’s the first track, and a fitting glimpse of the eclectic wonders to come. It skips and purrs and flies off in all the right directions with its jaunty brass and mystic middle eight. ‘Humble Digs‘ immediately lives up to the promise of mad beauty, shifting from gentle trotting piano to dreamy sliding violins and crashing drums.

‘Dodecahedron‘ is the real star song here, though. These beams of xylophonic joy are just the kind of music to dance to with the first rays of winter dawn, showing off Houghton’s frankly sensational voice to full effect. This folky pop heartstopper hints at Vashti Bunyan’s silky tenderness, with gleams of Marianne Faithfull’s fiery eloquence and a remarkable passion that’s all Houghton’s own.

Her songwriting has an equally admirable feel for the epic and the intimate, making no bones about hopping from one to the other within the space of seconds. Then there’s that offbeat wit of Houghton’s. Songs like ‘Atlas‘ and ‘Lilliputt‘ have an indomitable sense of fun, easily worthy of The Beatles’ pleasantly strange ‘Penny Lane‘ or ‘Strawberry Fields Forever‘.

She’s not happy to find one formula and run with it, either. You can tell ‘Franklin Benedict‘ and ‘The Barely Skinny Bone Tree‘ are by the same band, but only because they’re so characteristic of a delightfully manic style we’ve been familiarising ourselves with for less than half an hour. The stark, electric growls of the former and the trickling string plucks of the latter showcase a group dynamic nothing short of startling. The Hooves of Destiny fit Houghton’s eccentric and ambitious songwriting perfectly – very much the Crazy Horse to her Neil Young.

The budding female singer/songwriter of 2012 has masterful competition on all sides, with fiercely beautiful music being made by Karen Elson, Lykke Li, Laura Marling and Zola Jesus, to name but a few. Beth Jeans Houghton is 21 years old, and she already has more than enough talent and gusto to stand alongside her contemporaries and prove herself to be something vastly different and worthwhile. Look out for this record, and look out for them. If there is any justice, Beth Jeans Houghton and the Hooves of Destiny will be unstoppable by this time next year.