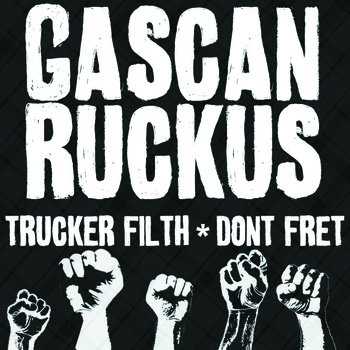 From the heart of County Armagh, Northern Ireland charges a hungry pack of rock brutes, carving trails of noise and youthful carnage wherever their hunts lead them. Collectively they go by Gascan Ruckus and having announced their arrival below the Irish radar last year with their EP “The Governor” they’re back on the blood tracks with new single “Trucker Filth“, sniffing out anything with ears, living or dead.

The foursome execute a widely recognisable punky sound with few chords and less frills, it’s nothing that’ll reinvent the wheel or answer great medical mysteries but even with all the ‘heard it all before’ conventions and little room to be inventive, the lads still serve up pure wreckless havoc with hooks and riffs slugging the spittle out of one another for every frantic slap on the kit.

Even their previous material reveled in it’s hectic potential to tear buildings to the ground and cram more bodies into garages than at one time thought possible but “Trucker Filth” takes even less prisoners.

It has that slightly annoying ability to neatly package a riot into a lunchbox and the simplicity compliments them well. With the kind of song writing that will have a tune festering in your brain on the first listen, the kind of song writing that can’t be forced, coming from people who love nothing more than making a fucking massive racket, sounding like a back alley scrap after a night on the lash between Mudhoney’s Seattle slime and pure unabashed ’90s “fuck authority!” skate punk. The likes of which was sneered, scoffed, kick-flipped and revolted in the name of by Pennywise and Green Day once upon a time.

“Don’t Fret” on the reverse is even better and more unforgiving in pace.  Thrashing and throbbing, it sounds like a band determined to be heard, whatever the consequences. I imagine them hopping the fence of some huge festival, slabbering hounds and security comically in pursuit while they storm the campsite generators to power their amps, kicking down the doors of occupied portaloos for the dwellers to behold their wipe-out punk, involuntarily using it to accelerate the already rock-bottom process of festival brick laying.

Above all of this, the sound is surprisingly clean instead of the standard concrete wall of noise approach to punk. There are little intricacies like drum fills, backing shouts and feedback leakages that trickle in around the hem of your hearing, like sonic espionage while the main body goes straight for the jugular.

The only issue I would raise would be to advise the guys to really materialize a sound within the riff-rock constraints that’s their own. Punk-infused hard rock like this can be seen as a really teenie, angsty, MOR genre and to stand a chance they need something with a more unique edge. The vocal patterns in “Trucker Filth” resemble rather than recall The Bronx (“Knifeman” in particular) and the riffs and mini-breakdowns are something we’ve all heard many times before. It’s not something I grow tired of too easily, but to a mass audience they need something to stand out and the melodic hints in “Don’t Fret” and older tracks like “Rise Up” point to what they need to exploit most.

There’s still room for growth so that these guys don’t become stuck in the ‘one trick pony’ rut, but in releasing scuzzy blasts like these at such an early start we can only dream of what they’ll be constructing by the stage they develop their true capability.

Listen to “Trucker Filth” and “Don’t Fret” below or download them free from Bandcamp along with Gascan Ruckus’ first EP “The Governor”.