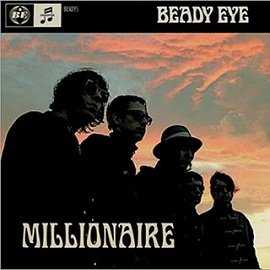 Do not let the title of this song mislead you – it is not a pompous insight into how brilliant it is being a multi-millionaire rock star; that just wouldn’t sit right with fans of Liam Gallagher, despite the fact he’s clearly not short of a few quid. On the contrary, the inspiration behind this single is of far less materialistic substance. A trip to Spain and the paintings of Salvador Dali inspired Beady Eye guitarist Andy Bell to pen this sweet little number that’s been released at a time when the band’s stomping ground’s weather is suspiciously serene, somewhat perfect timing for your BBQ iPod shuffle playlists.

The releases from Beady Eye’s debut album, ‘Different Gear Still Speeding‘ have done well to showcase the many different sides of an album that oozes variety. ‘Bring The Light‘ introduces the 50’s rock n’ roll influence. ‘Four Letter Word‘ ticks the ‘lairy anthemic rocker’ box and ‘The Roller‘ serves its purpose as the album’s staple singalong tune, with huge nods to a certain Mr Lennon.

So what about ‘Millionaire‘? Their second official release represents a gentler side of the band’s musical pallet and finds Liam reacquainting himself with that delicate quality in his voice which we’ve not heard since the likes of Oasis‘ ‘Don’t Go Away‘. It also rings true Liam’s description of the album being more “musical” than Oasis. Its infectious melody and intriguing lyrics which Liam wraps his voice around so well all add to the song’s charm.

Beady Eye are not afraid to show off their influences and they would be the first ones to admit that – it was more or less the blueprint for their debut record. The La’s are one of the prime influences flowing throughout the album and ‘Millionaire’ is the most obvious example of how connected the band are to those scouse heroes. The song’s loose, uninhibited, stripped back sound, awash with acoustic guitars, give it a distinctly La’s feel, with shades of their track, ‘I.O.U.‘ It also reeks of that optimism found in early Oasis tracks like ‘Round Are Way‘.

Just don’t expect to nail the lyrics on your first go at pub karaoke, they’re a bit of a mouthful. “Sweet Cadaques to Figueres a 40 minute ride, you drive it and I spend it looking out my window” – yes, you read that right, and not a mention of fur coats or champagne breakfasts.