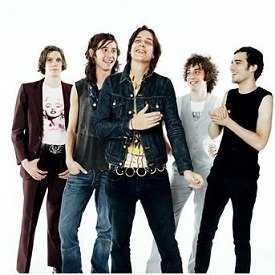 Spinner reports the band had been performing established favourites such as ‘Reptilia‘, ‘Last Nite‘ and ‘Juicebox‘ before a fire marshal ordered the set to end six songs in because of excessive noise.

Before the show, Strokes frontman Julian Casablancas had told MTV News of their battles to keep sets fresh while still giving fans the classics they crave at one-off events such as this.

“I guess me personally, I prefer playing new songs, but the crowd prefers old songs, reaction-wise,” he said. “So it’s always weird ’cause you could play a song that’s mind-blowing and they’d just be like ‘wow,’ shedding a tear, but they’ll be silent. So you’ll think, ‘That sucks and we’ll never do that again.'”

“And then you play like an old hit that you played a thousand times, it’s kind of boring, but they’re loving it. So you’re like, ‘Let’s do that!’ ”