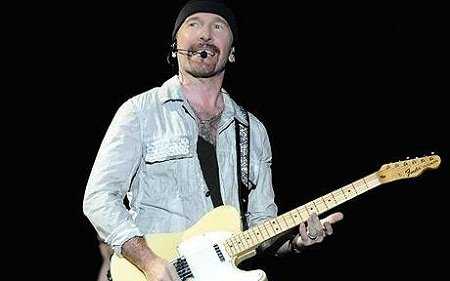 U2 guitarist The Edge confirmed the worst kept secret in music last night by publicly announcing the band will make their long-awaited debut on Glastonbury’s Pyramid Stage this June.

While presenting the award for Best Festival to Glastonbury at last night’s NME Awards, The Edge paid tribute to the Worthy Farm event, and spoke of the group’s excitement at the prospect of headlining this year.

“It’s more a way of life than a festival,” he told the audience. “I made it last year to the Friday show – got to play with Muse, got to hang out, ate a veggie burger and fries, and got to play on the Pyramid Stage. I have to say there is something really special and iconic about that stage.”

“So we’re all looking forward to coming back to pick up where I left off. And we’re so excited to get to play in front of the world’s greatest festival audience. We’ll see you there.”

Later, Glastonbury organiser Michael Eavis expressed his own excitement at the U2 booking, after their enforced cancellation last year due to frontman Bono‘s back injury. “After the disappointment of U2 being unable to play last year, we’re now doubly excited at the prospect of the Friday night supergroup breaking the sound barrier,” he said.

As previously announced, Coldplay and popstar Beyonce are also due to headline Glastonbury 2011.