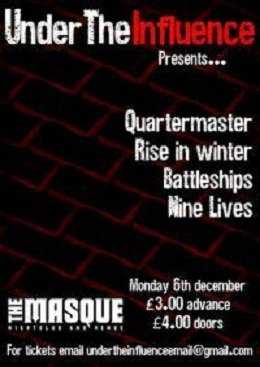 Okay, there was a piss poor turn out and frost on the steps, but Under the Influence certainly provided a mixed bag of music. Of the fifty or so people shivering in the loft most were getting their free shots from the bar, rather than watching the acts on stage.

However, quirky openers Quartermaster soldiered on, decked out like Victorian gents in elegant waistcoats and cravats. The three piece played well, especially their singer-guitarist whose guitar work was dead on. Quartermaster, although graced with a name that sounds like some cheap American Poundland, powered through a great set padded out with Kinks and Who covers. They enjoyed themselves and it showed.

Next on the bill, with possibly one of the largest entourages, was Rise In Winter. Let’s just say they were memorable for all the wrong reasons. In a monotone voice their front man informed us, “the other two are shit. Not Quartermaster, just the other two bands are fucking shit.” There was even a cover of ‘Helter Skelter‘ in that same monotonous voice, featuring a guest appearance from Quartermaster’s guitarist, who seemed to be the only one bothering to play his instrument properly.

Rise In Winter’s pathetically meek bassist softly caressed his barely audible bass, as their guitarist repeated the same lame Beatles chord progression for the duration of the set. In the middle of ‘Helter Skelter‘ Rise In Winter’s singer explained how drunk him and his band were, taking the opportunity to swig from his can of beer and check his phone. I don’t blame him either, they were an absolute crock of shite.

It’s just disappointing that his hilarious put-downs weren’t backed up with any actual talent. The best comment of the night was, “we were going to write a song about 9/11 in French, but we’re not fucking pretentious”, followed by a whispered vocal performance from their bass player.

Anyway, succeeding the atrocity that is Rise In Winter, a handful of overexcited groupies flocked over to see Battleships, A.K.A the band formerly known as My Aunty Sam. These guys were much easier on the eye, louder and tighter than the others, however they just haven’t discovered their niche yet, and were basically rock with a bit of an emo slant.

Battleships also had the novel idea of picking girls at random from the audience (who obviously loved the attention) then naming songs after them. Although their original material could drag on because the melodies needed improving, they utilised guitar effects well and appreciated the value of silence, being able to break up the music rather than have it as one long drone.

The audience literally left en masse towards the bar, as headliners Nine Lives took to the stage. Understandably the band’s awkwardness was glaringly apparent to the few stragglers left behind to watch them. Nine Lives turned out to be alright, a very Joy Division-esque outfit complete with keyboard set to harpsichord and eighties effect options, twitchy singer and strangely unnerving tunes.

Nine Lives’ singer is definitely a centrepiece you can’t help but stare at. His movements on stage were comparable to some sort of sinister mime artist. At one point the finger he pressed to his lips conjured up images of a serial killer telling his latest victim to keep quiet. Unfortunately the stabbing beats of their songs didn’t result in anything particularly spectacular music-wise, even my sympathetic lone applause wasn’t enough to encourage them, and in the end that jerky singer stormed off stage right in the middle of a song, and straight out the front door. The remainder of Nine Lives simply trailed off through the stage door, probably thankful that the embarrassment this night had produced was finally over for them.

Maybe it was the unexpected icy weather of early December, the fact it was a Monday night or just plain crappy organisation that resulted in such appallingly low attendance, but whatever the reason Under the Influence was, at the very least, an interesting event. Quartermaster were the star performers here, although they’re all young bands and need the chance to develop properly.

It is certainly advisable to come along to the next Under the Influence show (if there’ll still even be one) sometime in February, which a little bird told me is planned around an ‘Anti-Valentine’s Day’ theme. If anything it’s a brilliant opportunity to see a spot of drama.