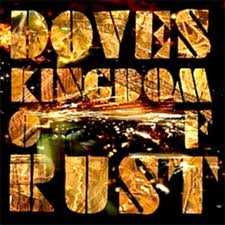 When Doves release an album like Kingdom of Rust, it’s hard to believe that Americans don’t find them worthy of the back-to-back No. 1 debuts on the album charts that the band has experienced in the UK. This album is yet another example of why every American who loves music should be paying attention to Doves, even if the band members aren’t being arrested on drug charges or engaged to supermodels.

On Kingdom of Rust, Doves establish themselves as masterful creators of dignified pop anthems, and remind aspiring bands that taking the longer road is sometimes the best way. The band, which established itself in 1998, has been going moderately strong ever since.

This record is full of energetic rushes and slopes that tend to ascend to thrilling pinnacles. One such build-up is featured in the album opener, the aptly named “Jetstream,” which begins smoothly enough and soon soars through a techno beat only to morph into a stunning mass of perfectly orchestrated noise.

Check Out the Music Video for Kingdom Of Rust directed by China Moo Young.