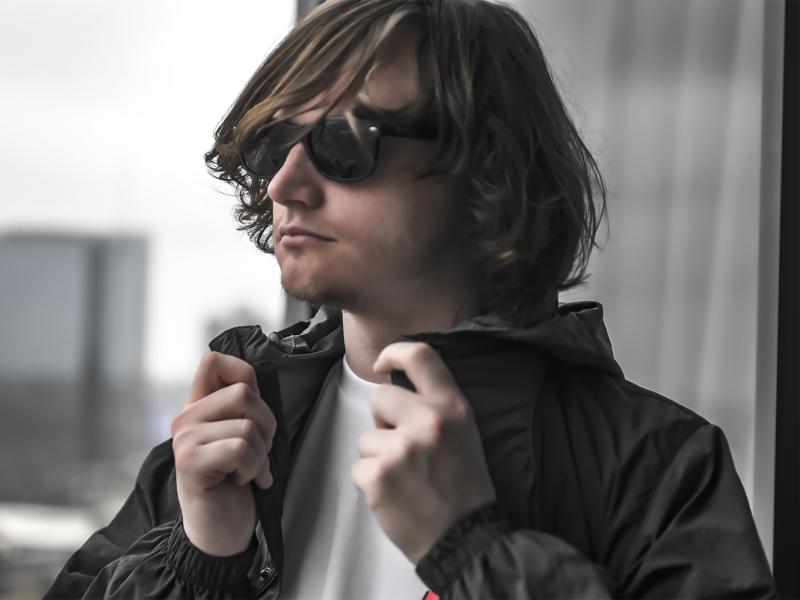 With momentum, an understanding of what it means to graft, and the goodwill of an entire city behind him, Jamie Webster’s unlikely to be walking alone any time soon.

By definition, almost everyone who joins us at the Live4ever Media Lounge in downtown Austin has come a long way, but for Jamie Webster being at SXSW is more than just about getting loads of air miles.

The last few years have seen the Liverpudlian go from busking cover versions in pubs to selling out arenas, the authenticity and everyman appeal of his politicised folk striking a chord with people bored by the slickness of today’s hollow pop.

In his hardest interview yet (his words), we spoke amongst other things about hating guitar lessons, the radical influence of his home city and having a pint in New York with Jurgen Klopp.

A few chords, a bit of passion and a lot of the truth. Are these your words about you?

Sort of. It’s actually about Bob Dylan, who’s been since I was about 14 the biggest influence on my music. Those words are my breakdown of what he was doing.

But I’ve used them as an inspiration for me: I’m not the greatest guitar player and I’m not the greatest singer, I’m passionate about what I do though and I make it work for me. I’d like to think it resonates with people and if they get behind me, we can do some good things together.

Tell us about Jamie Webster, for those who don’t know much about you.

I grew up in the north end of Liverpool, the oldest of three children. Our parents worked really hard to give us what they didn’t always have when they were growing up.

My mum was the big music fan in the family; she was really into Bowie, and both of them liked Squeeze, along with Genesis. Later she got into Snow Patrol.

It was her that made me take guitar lessons when I was a young kid, but I hated them. It wasn’t until I went to high school that I actually got into it as an instrument, mostly because a lot of the kids there were into music, as well as the school being in the part of the city The Beatles came from.

I became mates with Danny Murphy (now a band member as well as playing with The Coral) and he showed me things like barre chords and recommended some songs to learn. We even started a band together, although it fizzled out when we were about 16. After that, my dad was an electrician and when I left school, I went to work with him. At this point music was just a hobby.

As well as you being closely connected to Liverpool as a city, you’re also becoming synonymous with the football club as well. How did that relationship begin?

My dad was a huge Liverpool fan and followed them home and away for years. He always told me it was more than just going to a game, that you travelled to different places, met different people and had great experiences.

I decided I wanted to follow in his footsteps, but I was only on an apprentice wage so to make some cash I started playing acoustic covers in pubs.

After a while people I’d met at the football started turning up to these gigs; all of a sudden there were 200 people in the crowd, all having a great time and singing the songs back to me. I remember the first time it happened and it was an amazing feeling.

A bit later I started playing these showcase gigs which took place after games that were a platform for local artists. Over time – it wasn’t started by me! – songs about Liverpool began to form part of the set and people started shouting out for them. Even then it wasn’t like I was a somebody though, I was just one of the lads, we all knew each other. There were no airs and graces.

Eventually the club got involved.

Yeah, they were great. Things moved quite quickly then. I played to 60,000 people in Madrid (where Liverpool were in the Champions League final) and someone had a banner in the crowd about the song Weekend In Paradise, but I didn’t even have a deal and it wasn’t out as a single or anything, at that point it was just a video I’d made.

On the flight out I got talking to a guy from Liverpool about my influences, mutual friends and local bands. He asked for my number and as it turned out he ran a record label; the day after that gig I got a text from him saying, ‘Let’s make a record’. I gave up my day job then, in 2019.

How do you square your connection with the club to your own identity as an artist, trying to win broader appeal?

Liverpool gave me a platform on which people could hear my music and I’ve felt the love from the fans right since the start. Obviously, I want to be inclusive to everyone, but equally I won’t forget where I’m from either.

Getting right up to date, do you get the sense now that you’re fulfilling a destiny, of sorts?

I don’t really believe in destiny as in ‘the stars aligning’, but I do think that by hard work you can make something happen. I think I’ve got a talent for entertaining people, but you’ve got to work hard to be good at it and if it’s not fulfilled then that’s a waste, but it’s on me.

For many bands we see here, Texas is the furthest place they’ve ever travelled, but that’s not the case for you.

I’ve been here before and also places like New Delhi and Australia, but that was working with the football stuff. This for me is the furthest I’ve been playing my own music.

How do you feel you’ve been received at SXSW?

Everyone’s been so unbelievably welcoming. You want a crowd that’s into what you’re doing. Audiences here give you a massive chance and we’ve been really lucky to play to such nice people.

You sung about making it to America on North End Kid. How does this feel?

Many artists have a goal to get over here, I know The Beatles did, but they wanted to have a number one record first. It’s got so much attraction, it’s Broadway, it’s Hollywood, it’s the stuff of dreams. And I’m not saying I’m gonna leave here with like a billion followers, but if I can turn even ten percent of the people at these shows into fans, then that’s a start.

You’re a hero at home, one of the most influential people on Merseyside according to a recent poll. How do you think that translates when you’re outside of the UK?

One of the themes in your lyrics is around community, but you’re also and outspoken critic of the Tories (the UK’s Conservative party). Do you think that in itself could be seen as divisive?

No. Not when you’ve seen what I’ve seen. For instance, many of us stayed indoors during the Covid lockdowns but they…they went and had a fucking party. These people are supposed to have our best interests at heart, but they’re laughing at us. What they’re doing is divisive, the lies they tell every day, the propaganda they put out, that’s to me is divisive shit.

We live in a country where it takes a professional footballer (Marcus Rashford, of Liverpool’s biggest rivals Manchester United) to use his social media platform to make this government feed children whose families couldn’t afford to do it themselves. Also, we have food banks all over, places where to enroll you’ve got to tell someone how poor you are. It’s humiliating and it’s wrong. And that’s why I feel so strongly about how this country’s run.

You also speak out against the unfairness of the UK’s justice system on the song Davey Kane.

I’ve got friends from similar backgrounds to me doing twenty years in prison. They either made the wrong choices or came from nothing and then felt they had to get money somehow.

The consequences are on them, but when they get out many people find it very hard. Somebody I know who’d got into a fight defending himself did a few weeks in jail then re-trained as a fireman after being released, only to have his job offer pulled at the last minute. Thankfully he’s now got a role working with young people who’ve been affected by crime. But there are many others struggling like he did.

Davey Kane is about him, it’s a message saying that the system isn’t helping people to stop them re-offending. In other countries, like Norway, ex-offenders are given proper support and a second chance. And it gets results.

When you leave Austin, what’s next?

Look, I used to gig at the weekend, and I was an electrician during the week. Now, I’m just enjoying myself and I’m making a living. If I can continue making music and connecting with more and more people, then I’m a happy man.

You wanted to appear at Glastonbury, but Covid put paid to that…

I’m playing it this year! I’m on the Leftfield Stage and I’ve been asked by Billy Bragg, one of the finest political singers of the last forty years, so to get the invitation was big moment for me.

I go there every year anyway as a fan, it’s the happiest place in the world, I’ve never seen a fight or even a crossed word. It’s like an adult heaven. To be able to play on that stage to a crowd fill of like-minded people will be special.

Check out Live4ever’s video interview with Jamie Webster from SXSW 2022, over on our official YouTube channel.