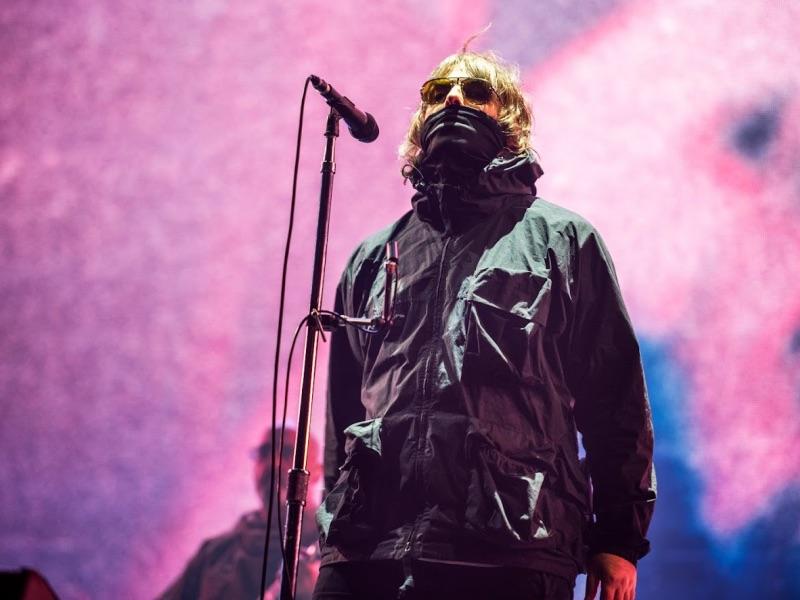 It’ll be choppy, but we’ll get there in the end.

From those early pilot events, thanks to the lack of clarity and support from a government shamefully ambivalent to a thriving, multi-billion pound industry that’s the envy of the world only a select few have been able to defy the odds and make 2021 potentially the start of the end of a time no-one could’ve imagined.

Retrain, they told those artists during lockdown who DIY it, for the love of it, who strive to have their work heard. Artists like Wet Leg, who instead of searching for openings in the recruitment industry are a must at the festival this year, even if to begin with the most notable aspect of the half-hour Sunday set is a member of the band wearing his guitar like a pair of badly knitted mittens.

It must be said that there is a palpable feeling of everyone waiting patiently for one thing, but only because with Chaise Longue this duo already have the type of single that most will spend their entire careers fruitlessly chasing for.

Yet there’s a constant idiosyncrasy and quirky personality to much of what comes before it, suggesting plenty more engaging times are lying in wait. For now though, the Isle Of Wight has a bonafide festival anthem all of its own.

If there’s a theme to the weekend’s line-up as a whole, it could be as a micro-study on the noughties era of UK guitar music.

There was a time when it felt like a new, usually British band was coming along with a new, usually dancefloor filling single every week, when bands in their dozens scored Top 10s and debut albums defined a certain generation’s formative years.

As those days get ever smaller in the rear-view mirror and we’re able to get a more complete view of them, their legacy is becoming an increasingly conflicting topic of discussion.

Was there landfill? Certainly. Were there bargain bins stacked full of instantly forgotten follow-up records? Absolutely. Are we left with a mountain of cross-society, genuine hits which just don’t seem to happen anymore? Undoubtedly.

That three of the 2000’s leading lights find themselves away from the Main Stage at Isle Of Wight is perhaps an immediate sign of that era’s ephemeral impact; that the Kaiser Chiefs and Razorlight both play to crowds which spill way out of the tent’s warm confines and into the chilly air of the Saturday and Sunday evenings respectively a testament to the emotional grip these two, and many more, still hold.

A rarity, the Kaiser Chiefs are a group who did manage to go beyond that one album millstone; the Ruby single a humongous crowd pleaser here, Angry Mob and opener Never Miss A Beat too landing equally as well as the obviouses from Employment which are greeted like the musical equivalents of a meet up with a loved one after 18 months of lockdown.

Equally, there’s a consistent theme of new songs lapping like a warm sea through the crowd, eventually being given their full attention, providing a reminder as they do that these noughties bands could sell their stuff, and bloody play.

Razorlight have taken a more circuitous route to their own Big Top headline appearance – a brief visit to the high seas of 18th century piracy in 2011 one of their more curious stop-off points. The ‘classic’ line-up reunited and armed with their debut album pretty much in full, Johnny Borrell is strangely turned down low from the off.

Whether this is a more wide ranging stipulation written up by the other original members upon their return is unclear, but a taciturn mood to go along with the mix issues means the gig is not quite the celebration it could’ve been. Yet a crowd starved of live music for two summers, wanting plenty of closing night karaoke singalongs, get exactly that. The joyous, communal mood even manages to almost drag America from its dreary, radio-chasing cynicism…Almost.

It’s still in the Big Top where we really get to remember what the right side of the noughties looked like. Maximo Park always had some of its best tunes; smart but catchy, story-telling but mass-appealing, art-school but unpretentious. Most of them are here; an exhilarating opening of Girls Who Play Guitars; one of that decade’s greatest singles, Going Missing; the ridiculously grand pop of Our Velocity and Apply Some Pressure.

The difference though is this year’s Nature Always Wins. Into their third decade, it’s one the best albums of the band’s career, and it’s that because they’ve dealt with the ageing process better than any of their contemporaries. Out of the nightclub and into the family home, Maximo Park’s habitat has changed, but the virtues of those early favourites have come with them.

Take Baby, Sleep – about a newborn up for all hours of the night, but in the hands of Paul Smith it’s expertly crafted dream pop that could be about any kind of loved one, constantly playing on your mind, for any number of reasons. The same goes for other set highlights like Versions Of You and All Of Me. They all add to what might well be the best performance of the weekend, from a band growing old masterfully.

The Main Stage gets the nineties; two consecutive sun-soaked afternoons soundtracked firstly by the understated jangle-pop of The Lightning Seeds. It’s a simple greatest hits set, and in turn an indication of how many of these they have. The next afternoon, Supergrass have the Best Of on display too but, as Gaz Coombes notes, they’re also enduring ‘one of the longest fucking reunions ever’.

If such a successful band having the wind taken out of the sails of their comeback isn’t exactly one of the biggest artistic tragedies of the pandemic, it’s still another sign of its wide-ranging consequences. The set has it all, but fails to shake off a lingering feeling that what could’ve been one of 2020’s best stories has now been reduced to one of 2021’s more melancholic footnotes.

It seems unthinkable, almost sacrilegious, to describe a James gig as self-indulgent, but here we are in the conversations held after, doing just that. Tim Booth, whose arms are usually held so wide, on this occasion seems to be enjoying himself far more than the crowd are. There’s Sit Down. There’s Sometimes. But don’t start Laid and then walk off.

These aren’t criticisms you could ever level at Liam Gallagher. It’s amazing to think a decade ago Beady Eye were basically recording a Dave Sitek solo album on his behalf, steadfastly refusing to pick at the ripe fruits of their frontman’s past.

Today, Liam Gallagher is back as the live juggernaut he always was, a comeback that could barely have been imagined when he finally woke up to the brick wall that band was pressing against with not much more than a tweet announcing it was mercifully over.

Given that Bonehead is up on stage here with him, that his son Gene comes out to bang a snare for one song to the interest of no-one but himself and the old man, that there’s nothing but a few cursory nods to As You Were and Why Me. Why Not? during the near two hours, whether all this success is now entirely reliant on the levels of nostalgia normally reserved for joint boyband tours is certainly up for debate.

One point often missed though – perhaps as an authentic Oasis concert slips ever further into the fog of memory – is the sheer wall of noise Noel Gallagher would demand on stage. The result of more than merely turning everything up to 10, it can’t be understated just how hard that band would hit live, and this show, with this band, does lack the signature guttural punch which tracks such as Rock N Roll Star, Cigarettes And Alcohol and Acquiesce would all deliver live in the hands of their ultra-demanding creator.

But it’s a fact which also undeniably helps that voice shine like it is doing at the moment, the voice that was the defining sound of Oasis. One which has always and still does absolutely ‘mean’ it. An authenticity and lack of pretension which somehow seemed to keep them grounded as they ascended to the plain of rock gods, still wedded to their fans as bank balances swelled and lives changed.

Well before Twitter, it was Liam Gallagher who kept Oasis connected to the fans, and it’s a bond which feels unbreakable on Friday evening at the Isle Of Wight.

It was up and down then. Highlights and disappointments. Welcome surprises and some missed opportunities. Gigs you’ll remember forever and nights you’ll have forgotten by the next morning.

Tents here like This Feeling and their unwavering, tireless support of new bands – Spyres, RATS, Pastel – who lack the opportunities those 00’s fore-bearers enjoyed. Ones over there like Hipshaker Lounge and Cirque De La Quirk providing the kind of entertainment you only ever see (and in some cases only ever want) at these kind of events.

Isle Of Wight went ahead, pressed on, jumped the hurdles placed in its way. Hopefully next year all those which weren’t as lucky will be able to do the same, providing their own unforgettable stories. A full calendar. Normality.

It’ll still be choppy, but we’ll get there in the end.