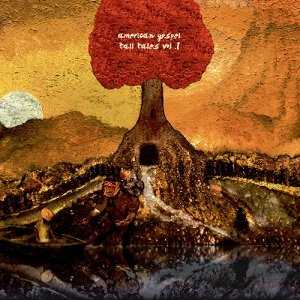 Having already released two EPs and an album with The Republic of Wolves in the last two years, it’s a testament to the personal drive and prolific muse of guitarist/singer Gregg DellaRocca that he has time to embark on a solo project as well.

Under the guise of American Gospel, DellaRocca takes the listener on an ambitious 12-stop musical travelogue packed with an exhaustive itinerary.

Fans of TROWs will be familiar with the textures in ‘Tall Tales Volume 1’, but the revelation here lies in the contrast of an upbeat and uplifting feel. That’s not to say that the album is light or indeed lightweight; quite the opposite. Musically it’s packed with grand cacophonous gestures, lyrically it’s deceptively dark, structurally it’s well conceived.

This is clearly a very personal album, a labour of love that has been shaped and nurtured over a number of years. Indeed, this project began at the end of 2009 and was produced during gaps with TROW. DellaRocca not only played most of the instruments himself but has also taken full control of production duties which sometimes echo with an air of Phil Spector proportions.

The opening track ‘I Know’ sounds like an exuberant Arcade Fire; a vocal riff establishing order to the intense build of rasping trombones and a bombastic sax. Meanwhile DellaRocca warns forebodingly that: “That the sun is expanding/And soon we’ll all be standing /In our own guts I know”.

The breezy waltz of ‘Bayonet’ placates the listener, stripping back the texture and providing an ambient moment of calm before steering into ‘The Hanged Man’ – surely a contender for their next single and highly reminiscent of the sound of Modest Mouse. The strident brass adds shape and dimension to a climatic build as DellaRocca deliberately strains “Maybe I’ll just die here, Or hang for another year.”

While some songs on ‘Tall Tales..’ are constructed and moulded by repetitive vocal hooks which anchor the fanfare swell of production, others are clearly genre development exercises. Following the pretty but fleeting campfire-moment of ‘The Woods’ the album glides into ‘The Falling Feeling’; a Country-edged number with predictable flashes of banjo buried in the unpredictable swagger of orchestral brass.

DellaRocca has acknowledged in interview that what distinguishes this album from his TROW work is the ‘genre-hopping’ nature of it. So perhaps it should come as no surprise to find ‘Better Off’ – a song that would sit neatly on any Pixies album – nestling up to the Americana swing of ‘Forget Not Yet’.

‘Tall Tales Volume 1’ is a bold venture into new territory for DellaRocca; an opportunity to experiment and develop musically. There may be times when the grandiose production feels a little cloying, begging for a break, and craving some space. But perhaps that was the intention – as he says himself in ‘Better Off’:

“And in the end I fucked it up, Just enough to know that I am better off.”