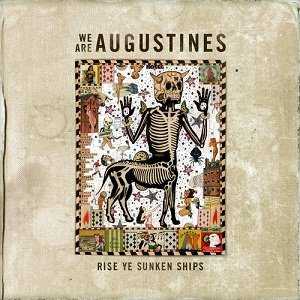 Before you hear about Jim McCarthy, before you join the dots between the songs and the prisons and the grave, ‘Rise Ye Sunken Ships‘ is already a giant of a debut record. Brimming with stories of doctors, drunks and shrinks, humming with the warmth of worn guitar strings, there’s no mistaking the signs of staggering depth to these songs.

‘Chapel Song‘ is beautiful and hopeful for some kind of future, filled with promises and boundless blue skies, so it’s ‘Augustine‘ and ‘Headlong Into The Abyss‘ that give us our first taste of self-destruction. Another approach to these tracks might have dragged the listener under; these are songs touching on desperation and painful memories. However, what they really speak of, and what the arrangements pick up on, is a sense of endurance. Faced with a drowning man who won’t swim to save his own life, guitarist Billy McCarthy refuses to give up: “Call the police, go ahead call your shrink/Call whoever you want but I won’t stop the car.”

Sonically, we’re firmly in Springsteen Americana territory for these opening tracks. Expectation almost demands that they echo the quiet, deeply personal doom of ‘Atlantic City‘ and ‘The River‘; instead it owes considerably more to the formidable optimism of ‘Badlands‘ and ‘Promised Land‘. Very nice, but why bother? The Boss already wrote those songs thirty years ago. That question lasts until about two seconds into ‘Book of James‘. Then it hits you, and it’s hard to look at We Are Augustines the same way again.

Violent and surprisingly intense, this is an Irish funeral of a song, towering over you in all directions. It’s mad and methodical by bizarre degrees; electric guitars howl and buzz and squeal like a breakneck Rory Gallagher solo slowed up, cut into pieces and played backwards. If that’s a confusing description of ‘Book of James’, it won’t be the last you’ll hear in the months to come. This song is genuinely moving, and it is destined to dominate. Any song that brings a tear to the eye deserves to.

This was already a powerful song when it was brought to producer Dave Newfeld’s church studio. Over three days and a great many confusing sessions, he built up ‘Book of James’ from powerful all the way to unstoppable. Suffice to say, Newfeld’s influence on the track is something akin to seeing Marlene Dietrich in real life, compared with seeing Marlene Dietrich in Shanghai Express, framed in perfect lighting – an attractive woman made heartbreakingly beautiful.

All that said, neither ‘Book of James’, or ‘Rise Ye Sunken Ships’ for that matter, can be explained without understanding what happened to Jim McCarthy.

Billy McCarthy, Eric Sanderson and Rob Allen have gone through a lot to get this music released. When McCarthy and Sanderson started We Are Augustines (taking up where their former band Pela had left off), McCarthy’s brother was still alive, diagnosed as a violent schizophrenic, imprisoned in solitary confinement. By record’s end, Jim had hung himself.

The two brothers were orphaned as teenagers, when their mother committed suicide by overdose, ending a life scarred by drug abuse and mental illness. These frank admissions, catalogued by writer Ryan Berg on  Augustines’ website, are at the heart of ‘Rise Ye Sunken Ships’ impact. Tracks like ‘Juarez‘ and ‘New Drink For An Old Drunk‘ relate to family history and family tragedy alike; they might be hard to hear if they weren’t so crazily catchy.

‘The Instrumental‘ sadly doesn’t really go anywhere, a common failing of instrumental tracks. That and the stark, choppy ‘Patton State Hospital‘ are the only songs that don’t quite work, but only because they must inevitably be compared with the best of a remarkably accomplished album.

So it emerges that, like trying to get your girlfriend to watch The Godfather for the first time, recommending ‘Rise Ye Sunken Ships’ is a tough prospect. It’s deeply beautiful and emotionally cathartic, but not everybody wants to go through that every time they flick on the CD changer in the car. It’s simply too good to listen to all the time. I mean, could you watch Sonny Corleone get perforated by machine guns every time you do the ironing? Your shirts would never survive.