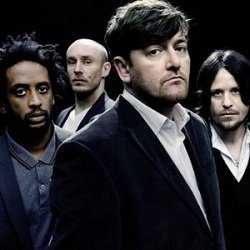 Elbow frontman Guy Garvey has told the Daily Mirror newspaper the band are already entering the early stages of the follow up to ‘Build a Rocket Boys!‘, and are using a different recording technique this time round.

Garvey told the paper drummer Richard Jupp has laid down a few patterns to begin the writing process, which he will now look to build the tracks around.

“Rich went into the studio and recorded several different drum patterns for me,” he said. “I’ll go away next week and try and write lyrics for them. We’ve never worked this way before, but we’ll see what happens.”

As the band prepare to perform at the Glastonbury festival next weekend, Garvey has also be recounting his worst experience at a festival, when a night’s heavy drinking led to him waking up in a toilet.

“People know me as an affable pisshead who likes writing songs. I did have a terrible experience one year though, when I woke up in a toilet,” he revealed, this time in an interview with The Guardian.

“I threw my clothes away immediately and bought some new ones. You’re picturing me now in some funky tie-dye kaftan, aren’t you?”

Elbow will perform immediately before headliners Coldplay on the Saturday night at this year’s event.