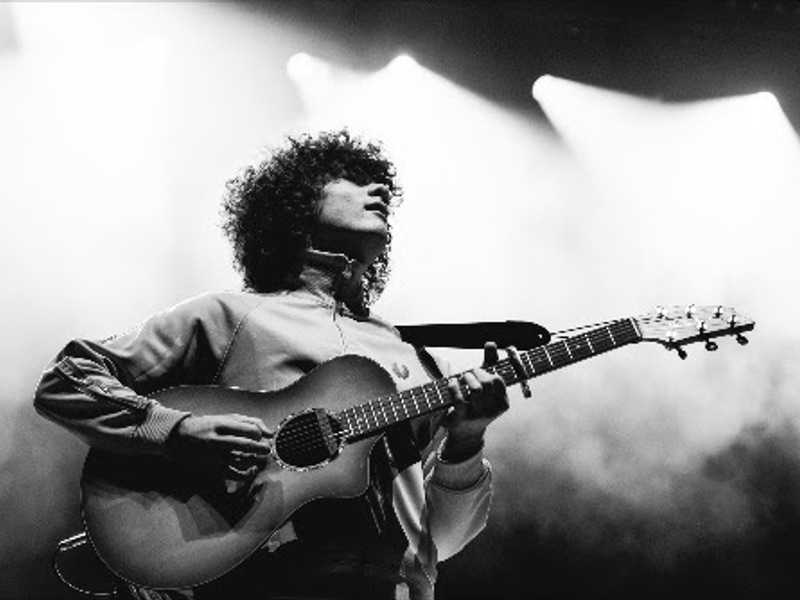 Dylan John Thomas is making up for lost time.

Within seconds of his conversation with Live4ever, with pleasantries out of the way, the young Scotsman’s enthusiasm and positivity radiates from the other end of the line as he recalls his hometown gig at St. Luke’s in Glasgow two days earlier:

‘It was absolutely bouncing. I can’t describe the buzz of looking out and seeing that many people bouncing. It’s my first Scottish headline tour as well, so it was the first time we embarked all round Scotland as the main act. It’s hard to describe and I’m getting a bit overwhelmed talking about it. People singing every word, it’s nuts.”

His short Scotland tour was the latest during a busy period of live gigs Thomas has played since restrictions ended. The lockdown in spring 2020 came at a particularly cruel time, as his debut single Nobody Else in 2019 had laid the foundations for a promising career, aided in no small part by prestigious slots supporting Liam Gallagher and, firstly, his mentor Gerry Cinnamon.

“We toured around the UK and Europe, which is nuts!,” he tells Live4ever. “I was building up an audience of my own, and still doing a bit of busking during that. I put out some demos and live sessions and it just happened organically, in the sense of being gradual. We’d go to a venue and two people would listen, but those two people would join in on the journey.”

“I toured with Gerry then recorded the single (Nobody Else) in a house. Everything seemed to fall into place from then, it got playlisted on Radio X. Every milestone always blows my mind, like being played on radio and before that touring with Gerry. It’s been a journey and a half.”

Thomas regularly punctuates his comments with enthusiastic, which consistently raise a smile, but also makes him hard to pin down as he justifiably basks in his achievements so far.

Were it not for the added months of the lockdown, his rise could be described as meteoric up to this point. Not that it came from nowhere, as he put in the hours early on in his career:

“I probably stopped busking about three years ago. I see it as an apprenticeship; I got rid of the shaky voice and the shaky legs. It’s just a buzz to play, it’s not like I’m freaking out about playing anywhere. That’s what busking gave me, a way to pass that stage of shiteing myself! Just being able to play to thousands of people who walk past every day.”

“I used to go to open-mics and I was just playing wee random gigs. Then I started putting out Soundcloud demos, just recorded in the house through GarageBand or whatever. By then I’d met Gerry and he’d become like a big brother to me.”

Jumping forward then back when telling his story, Thomas recalls the heady days of late 2019/early 2020 with glee: “I toured with Liam Gallagher as well. It was a cluster of the most mental gigs ever, touring with Gerry on his arena tour and then halfway through I went with Liam on the Scottish leg of his tour, then back to Gerry. Two months of the most mental gigs ever, sold-out arenas.”

Then the lockdown happened, and plans for everything were curtailed. Like everyone, Dylan John Thomas was housebound, by law, to sit and stew on what could have been.

Yet his creativity had other ideas which brought about its own frustrations, as he explains: “One of the things that became difficult during the lockdown was to gauge when to release songs.”

“All we wanted to do was to be able to play them live. Most people listen to songs at a concert. In the middle of lockdown, we were going, ‘What’s the point in doing a song if we don’t actually know when we’re going to be back?’.”

“That’s what makes it more special. The TRNSMT set…three weeks before that I was stuck in my house playing FIFA for a year. We only rehearsed for the last week! The amount of gratitude I have towards anything to do with music…actually, not even to do with music, just being able to go for a meal with your pals.”

“Nothing beats that feeling of having a night planned with your pals and having a couple of drinks, go to a show or whatever. To be starved of it for the best part of two years sets you up for this.”

The week before our chat, Thomas had been supporting man-of-the-moment Sam Fender in Amsterdam, which was a different but no less fulfilling experience for him: “That was mental, you could hear a pin drop in that crowd.”

“They’re just focused right on the songs. Especially as a support act, you’re used to playing places where everybody’s just talking over you, not to say they’re disrespectful, but it’s just a different volume, and the focus that they’ve got on a support act is unreal.”

“I started off acoustic, and I’ve got a band with me now so there’s that element of having a bass, or whatever. But I’m used to playing in front of crowds where it will be bouncing. It was almost like a town hall, or something. A sit-down concert, something like that. It was class though, I enjoyed it.”

“The people I’ve supported – Gerry, Liam and Sam – are probably the three biggest solo musicians at the moment. They’re definitely in the Top 10 with that kind of fanbase, anyway.”

The holy triumvirate should watch their backs, because Dylan John Thomas is snapping at their heels. His self-titled debut EP has gone down very well, another fact for which he is endlessly grateful:

“People only got the record a week ago because of vinyl distribution, and the reception’s been nuts. Even at record signings, with people actually turning up….it blows my mind. It’s hard to describe the feeling of being able to get a tangible record out. This is it, this is what you do it for!”

The immediate future is bright too, support slots with Ocean Colour Scene at his hometown’s most famous venue, the Barrowlands, and plans slotting into place for 2022.

“We’ve got another tour on the go and hopefully another EP out by springtime,” he tells us. “We’ll be getting in the studio January/February time and get a couple of tunes out.”

“We keep a sonic thread throughout the songs, and we’re not trying to impress anyone by trying anything that’s new. The next body of work, of maybe 4/5 songs, we’re still working on that. I guess the amalgamation of those two (EPs) will be the bulk of the album.”

He also alludes to an imminent, big live announcement, which suggests the upwards trajectory will only continue into next year and beyond.

Deservedly so, as Dylan John Thomas’ passion and enthusiasm is not only infectious but demands wider attention, which will be forthcoming the more people get to know him.