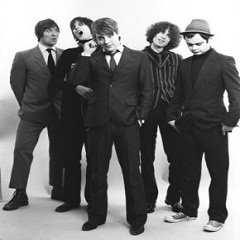 Leeds-based Kaiser Chiefs have announced their return today with the unveiling of new single ‘Little Shocks‘ via a post on their official Facebook page.

The band have been on a break following the release of the 2008, Mark Ronson-produced album ‘Off With Their Heads‘, whose relatively poor sales sparked rumours of a split when the single ‘Good Days Bad Days‘ failed to trouble the Top 100 in the UK, this despite a positive reaction from critics.

The group insisted an imminent end was never on the cards, and have now unveiled the video to accompany the single (below), with a new album expected to follow later this year.

Kaiser Chiefs will play two shows at the Princess Pavillion, Falmouth on June 7th and 8th ahead of planned festival appearances this summer, which includes spots at the Isle Of Wight festival on June 10th, and Glastonbury, when they will perform immediately before Queens Of The Stone Age on the Other Stage on Sunday, June 26th.