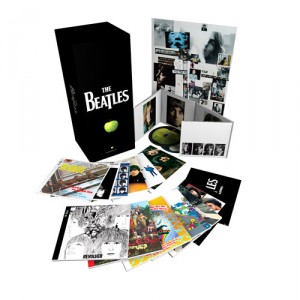 Here’s a look at our picks of highlights in UK music coming up this week , which includes a huge Manchester gig from Coldplay and plenty of treats for Beatles fans.

The boxset of the fully re-mastered back catalogue of The Beatles is released today, with the individual albums being released on Wednesday. The Cribs’ fourth studio album, and first with Johnny Marr, ‘Ignore The Ignorant’ is out today and London-based singer-songwriter Jamie T releases his new album ”Kings & Queens’.

Coldplay return to the UK for a huge show at Lancashire’s CCC ground on Saturday, support comes from Jay-Z amongst others. Editors perform at Birmingham’s O2 Academy on the 10th and Jet’s UK tour has dates in Nottingham, Manchester, Glasgow and Leeds over the coming week. Fleet Foxes have dates in Newcastle on Wednesday and Manchester on Friday.

BBC2 has a live half-hour show from The Mercury Music Prize event on Tuesday (10pm). The Beatles’ second film ‘Help’ is on BBC4, Thursday (11.10pm). The station continues the BBC’s Beatles week with ‘Sings The Beatles‘, which features covers of the Fab Four’s songs from acts such as Oasis and The Carpenters, on Friday (9.30pm). MTV Two also have an evening dedicated to The Beatles, including a making-of documentary for ‘Sgt.Peppers’ on Wednesday evening. Channel 4 presents a live set from Placebo on Friday night (12.40am)

Radio 1 has a ‘Muse Night‘ on Monday, which will feature highlights from their weekend homecoming gigs at Teignmouth. On 6Music at 4pm on Monday, The Cribs join Steve Lamacq to play tracks from their new album. The same station also has full coverage from this year’s Mercury Music Prize on Tuesday. On Wednesday, the station has a 1987 gig by the Ramones played during Gideon Coe’s show. Absolute Radio celebrate the new remastered Beatles albums by playing a selection of them in full this week. Amongst those featured are the classics ‘Revolver‘ and ‘Rubber Soul’.