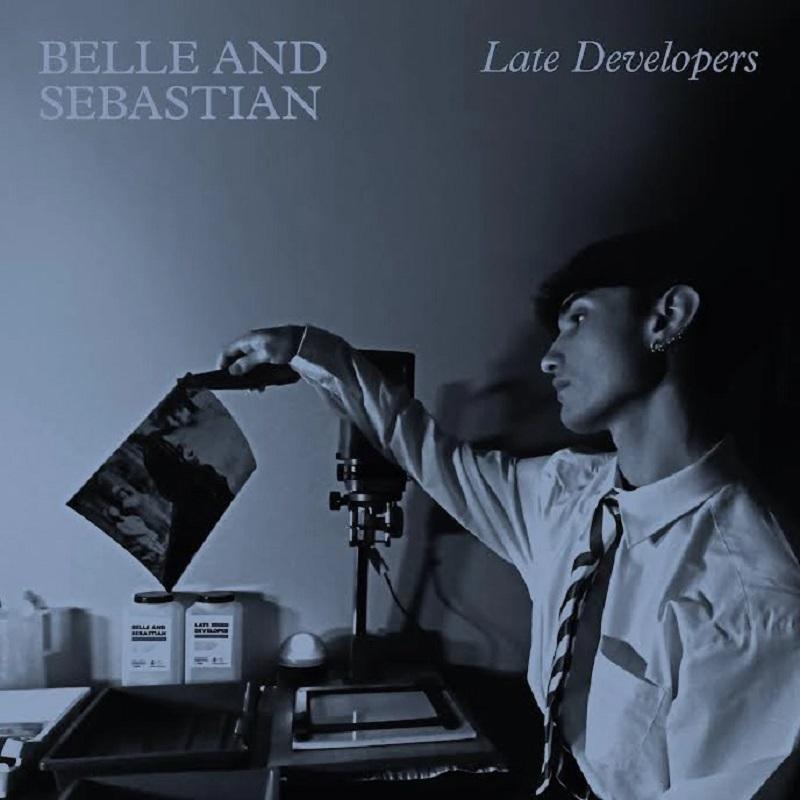 Belle And Sebastian have just announced their surprise new album.

Of all the qualities attributed to Belle And Sebastian over the years, the Glaswegian bards have rarely been described as workaholics.

Understatement and keeping a tight control over quality meant that 2022’s A Bit Of Previous was only the eleventh studio album of a career which stretches back to 1996; it was also, thanks to the pandemic, the first that Belle And Sebastian had recorded at home by the Clyde in two decades.

It might’ve been reasonable then to assume that a waiting world would be kept waiting, but like buses along comes Late Developers only a matter of months later, a release made hush hush until the last minute as if a late Hogmanay surprise.

Its existence owes everything to a creatively fertile period for the group almost like no other, but any notion that the contents are half ideas is definitively trashed by an excitable notary in Jeff Rosenstock: the sessions’ prevailing mood, he says, was, ‘like friends in a room together communicating through music and enthusiastically encouraging each other to explore every possible path with fervour and love’.

If that sounds like everyone spent half the sessions raving their middle-aged heads off, this isn’t (as the Belle And Sebastian’s history has proven) quite the case.

Tones of darkness and light have been omnipresent in their music and, regardless of the peripherals, this remains the case.

Opener Juliet Naked leans to the former, grappling with some skeletal, milkman-of-human-kindness guitar and a desultory flute, whilst When We Were Very Young captures perfectly the drawbacks of trying to contemplate the planet’s desperate meta through the prism of normal life’s mundanity.

So far, so traditionally rain town, but if a defining impression of its predecessor/doppelganger was of old hands experimenting with what it all still meant to be them, Late Developer then only takes that laudable ethos further.

From the archives – hell, from before there even was a Belle And Sebastian – comes When The Cynics Stare Back From The Wall, a paean to sweetness realised with the help of Camera Obscura’s Tracyanne Campbell, whilst the brassy closing title track finds Murdoch in a contemplative but sunny mood, singing: ‘I will take the risk/settle for the bliss/Aim for higher things.’

Are these the words of people settling for compromise? Not one bit of it. Whatever the mood, everything retains a unified sense of purpose and quiet buzz of energy being recallibrated.

This is especially easy to connect with through the album’s sparky middle section, beginning with the vaguely countryfied and Stevie Jackson-penned So In The Moment, before Murdoch gloriously kitchen sinks his vocals on the soulful The Evening Star.

Even that’s far from the real gravy however, which reveals itself on the funky disco (yes!) of When You’re Not With Me, with the ensemble sounding very much like a No-One Is Lost-era Stars.

But hold onto your knitwear, because co–written with Pete Ferguson I Don’t Know What You See In Me is an actual banger. Yep, give those specs a clean and read that again. A BANGER.

It’s a huge credit to the ensemble cast that none of these apparent juxtapositions feel awkward, or unnatural; the spanning that characterises Late Developers would be taking risks with a fanbase who might not love Belle And Sebastian like they do their own relatives.

But Uncle Stu et al are becoming masters of making gold whilst doing whatever they feel is right, in the process nudging us towards new horizons.

And after all they’re hard workers, but never hard work.