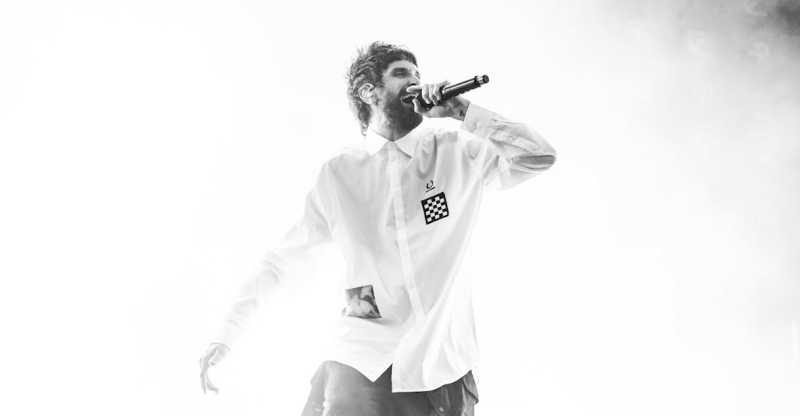 New Kasabian are a hit on Halloween.

On the biggest party night of the year in old London town there are few bands better suited to provide the required soundtrack.

After The Lathums warm the crowd with a selection of cuts from both last year’s number 1 debut and their just-announced second album, Sergio Pizzorno and The Other Members ratchet up the excitement for an already well-lubricated Ally Pally.

We jest of course, as simply referring to them as The Others doesn’t do justice to the contributions of Pizzorno’s bandmates.

Long-time drummer Ian Matthews, never found wanting for enthusiasm, is a beast on the skins as he liberally peppers the electronics with thunderous percussion, while fellow veteran Chris Edwards provides either funk or rigidity on bass, depending on what the song requires.

It was an inspired move to bring in The Music frontman to step into Pizzorno’s shoes on guitar and backing vocals (and keys and occasional percussion) while the big man went up top.

An adept musician with a similar voice to Pizzorno, he carves out his own niche amongst the noise and, judging by their body language, seems to share a bond with the frontman. Harvey even teases a few of his own infamous dance moves.

Yet, where it was once a two-man show, Pizzorno has taken the responsibilities of being front and centre with minimal fuss and maximum energy.

More MC than singer, he begins proceedings in a magnificently preposterous fur coat (swiftly abandoned, surely for reasons of heat and restriction) as a ball of energy and doesn’t let up, the huge stage not enough to contain him. His voice, not his strongest asset, is bolstered by Harvey while the years’ practice in being co-singer have paid off.

Pizzorno could be forgiven for abandoning some of the better-known songs in their canon for some numbers on which he had lead vocal, but he refuses to shirk the challenge and delivers the hits.

After newbie Rocket Fuel – a Prodigy-inspired, industrial hurricane – opens the set, album openers Club Foot, a rattling Ill Ray (The King) and the buzz-saw riff of Underdog are quickly dispensed with.

The yearning Chemicals (from this year’s The Alchemist’s Euphoria) is followed by a medley: a truncated version of the nonsensical Doctor Who-cribbing Eez-eh, You’re In Love With A Psycho and a cheeky cover of Daft Punk’s classic One More Time.

Much was made of Tom Meighan’s departure back in 2020, with the usual ill-informed observations that Kasabian would lose something, with said critics seeming to forget that Meighan was just the singer.

The power of the band was in the music and, if anything, they seem revitalised; massive levels of reverb and nuclear bass fill the cavernous arena.

The bombastic Stevie is gargantuan, the UNKLE-inspired Scripture monstrous and, while closing with a celebratory L.S.F. (Lost Souls Forever) and Fire is predictable, it never fails as the audience very nearly drown out the band.

But there are quieter moments too. Amusingly (they never have been afraid to laugh at themselves), a bus stop prop is wheeled on stage as everyone (bar Edwards) sits down for acoustic versions of Processed Beats and Cutt Off.

Later in the set, the Pink Floydian T.U.E. (The Ultraview Effect) flies high while the Detroit house of Treat has a groove which allows the audience the chance to breathe.

Essentially critic-proof, Kasabian continue to be loved by their dedicated fanbase and once again prove that they are a fearsome live proposition.