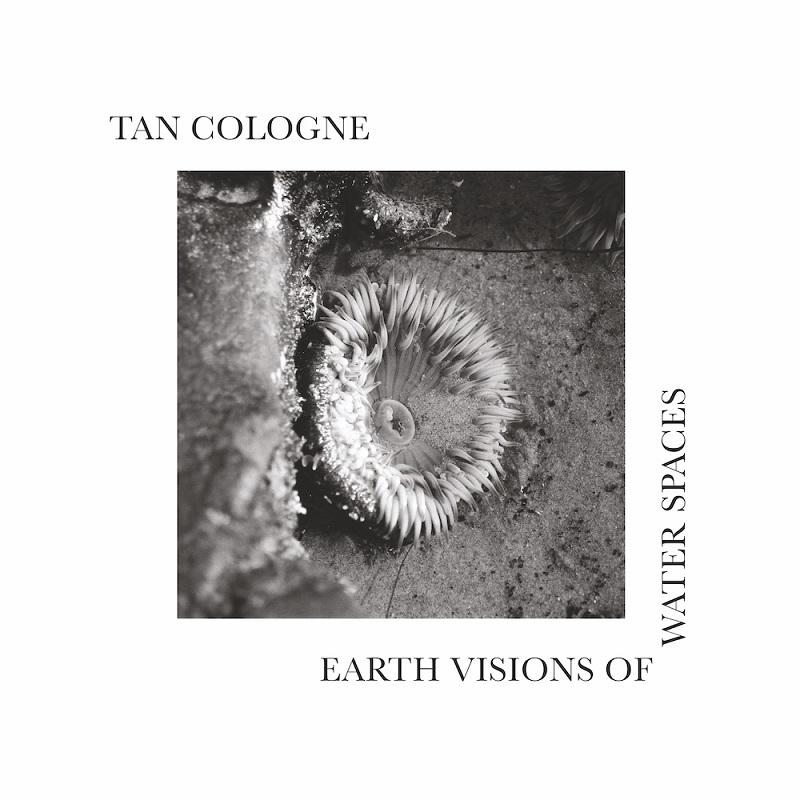 As with their 2020 debut Cave Vaults On The Moon In New Mexico, Tan Cologne’s sophomore album Earth Visions Of Water Spaces is a testament to the artistic collaboration of its creators, New Mexico interdisciplinary artists Lauren Green and Marissa Macias.

Green and Macias have once again written, played, produced and mixed everything themselves. Their aesthetic principles remain clearly defined, right down to the continuity of their minimalist sleeve designs, making good use of Macias’s experience as a visual artist and photographer.

In the press release, Green and Macias clarify that, ‘The entire album is about water: droplets of water, atmospheric exchanges of water and the transformation of Earth by and through water’.

To their credit, Tan Cologne have done more than merely conceptualise their album after the fact; their music actually does speak to these themes with some coherence.

Perhaps this is because, despite being very much a joint effort, their music has an unusually unified creative voice. Not, one suspects, an affected voice arrived at by compromise, but one which comes naturally to them; a happy accident born of two like-minded souls finding in each other a mirror for their own ideas about the world and how art should be made.

The nexus of their sound remains those gorgeously interwoven, reverb-drenched guitars which unobtrusively chime away at all times.

Green’s drumming and bass playing remains as tasteful as before; a useful backbone to many of their slow-paced but focused and solidly structured jams.

If there is a difference in sound between Cave Vaults and Earth Visions it is perhaps with the treatment of the vocals, which seem to have retreated even further to the back of the mix.

The melodies, given voice by Green and Macias, often seem to have no privilege over the melange of guitar licks and keyboard riffs which make up the album’s backing tracks. Everything shares the same ecosystem.

This egalitarian method of arrangement works best when Green and Macias utilise those tried and tested methods of composition, melody and harmony.

For instance, note the pleasing way in which melody is mirrored in vocals and guitar on Floating Gardens, guitar providing a solid harmonic foundation to Green’s and Macias’ airy singing.

In the chorus of that song, as in the lead-off single Topaz Wave, there is a clever call-and-response dynamic at work between voice and guitar: melodic phrases begun with singing are elongated and linked together with guitar.

Of course, as with all productions of this kind, which place great importance on sound design to the detriment (albeit intended) of the intelligibility of the lyrics, it can be difficult to make out what is being sung.

So it is with large sections of Earth Visions but, happily, much of the album casts a spell over the listener potent enough to make them want to lean in to catch whatever scraps of lyrics they can, rather than disengaging and becoming frustrated that they are missing out.

Some tracks work less well — ironically enough, it is the instrumental Pastels which seems the most obvious target here. A mid-album exercise in establishing a mood with only simple loops, it sounds like it needed editing down a bit; think Radiohead’s Hunting Bears, but running to nearly four minutes.

All the same, when Tan Cologne are at their best, as on their most recent single Space In The Palms, the psyche-tinged haziness and lilting beauty of Earth Visions Of Water Spaces reaches the heights of stylistically similar cult classics like The Verve’s A Storm in Heaven.

And, like that other band, Tan Cologne seem to be, despite their best intentions, blessed with a keen pop sensibility.

Whether they choose to embrace the pop ethos and sound as The Verve went on to do, or continue making high concept soundscapes, we can expect more beautiful music to come from Green and Macias.