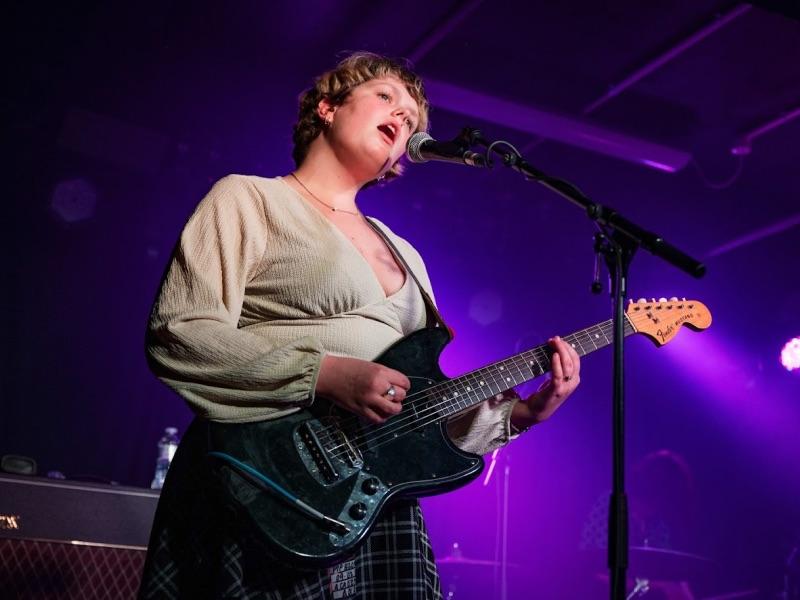 The weather clears for a memorable final day at Deer Shed Festival 2022.

It had been three years since Live4ever made the trip to Deer Shed, so it’s worth restating for the record that, although it’s held in rural North Yorkshire (that’s the posh bit), no sheds are used and unless something was going off we weren’t aware of, no deer are involved either.

Now in its 12th iteration, this proudly boutique event continues to punch well above its weight in terms of both the quality of talent it attracts and the myriad of extracurricular activities on offer, which is probably the reason why it also remains one of the most child friendly events on the calendar.

Sundays though. Normally on a festival’s third day everyone’s thinking about their own beds, a proper shower and whether they can face another helping of Falafel, but after a couple of mixed days weather-wise the clouds at least rolled back, and the sun came out.

Speaking of showers, Amber Strawbridge – AKA Bored At My Grandma’s House – once wrote a song about one called Showers, but whilst her lo-fi bedroom indie wouldn’t go out of its way to steal the soap, the five piece’s set, finished with the relentlessly catchy single Detox, would have anyone reaching for a towel.

Meanwhile, at the In The Dock Stage ventilation seemed to be another band’s problem – however the buzzy Gretel Hänlyn was gradually winning over a crowd still shaking off the cobwebs via the pop-meets-grunge of tracks like Motorbike and Apple Juice.

Now, it’s been a longstanding bone of contention for us that Cardiff’s Buzzard Buzzard Buzzard haven’t been devoured by the monster called success by now. After a string of brilliant singles, their debut album Backhand Deals should’ve convinced the world that in singer Tom Rees they have a genuine star for the ages, but we – and they – remain unfulfilled.

Performing at peak sun time, Rees confesses he’s melting whilst going long on his Freddie Mercury affectations, but the band’s magic is undimmed, their killer track Double Denim Hop is magnificent and, despite the global warming, they even have a man on cowbell, just when you thought things couldn’t get crazy enough.

Also representing South Wales, The Bug Club are the latest in a loooong line of fuzzed out, punk-pop diamonds in the rough from down the M4. Bass player Tilly has a hugely entertaining Angus Young-esque playing style, and tracks like If My Mother Thinks I’m Happy and the gloriously thrashy, sweary A Love Song are some of the day’s most stick around earworms.

Promoted to the main stage (more on that later), The Mysterines are quick to prove that they probably deserved to be there anyway. From Liverpool but sounding like they were raised on the mean streets of Detroit or New York, their hardscrabble punk plows the same furrow as The Ravonettes or The Kills and they kick off their set with Life’s A Bitch (But I Like It So Much). What’s not to love?

But of course, there was more. New to us (shamefully), Falle Nioke is a singer and percussionist from Guinea who writes and performs in seven languages while also playing a range of traditional instruments rarely seen or heard outside of their heartlands. Add to this some contemporary western sounds and, despite the small crowd, an intriguing Afroclash time was had by all.

Pip Blom might be from Holland, but the quartet named their second album after a chain of motorway service stations – and they’re so Anglophile they even congratulate the still celebrating crowd on the England women’s team winning the European Championship.

Again, elevated to the main stage after the withdrawal of Dry Cleaning due to illness, tracks like Keep It Together and It Should’ve Been Fun showcase their what-you-hear-is-what-you-get indie for an enthusiastically mellowing crowd.

In summary? No Deer. No sheds. All fun. All sun. See you next year, in a beautiful place out in the country.