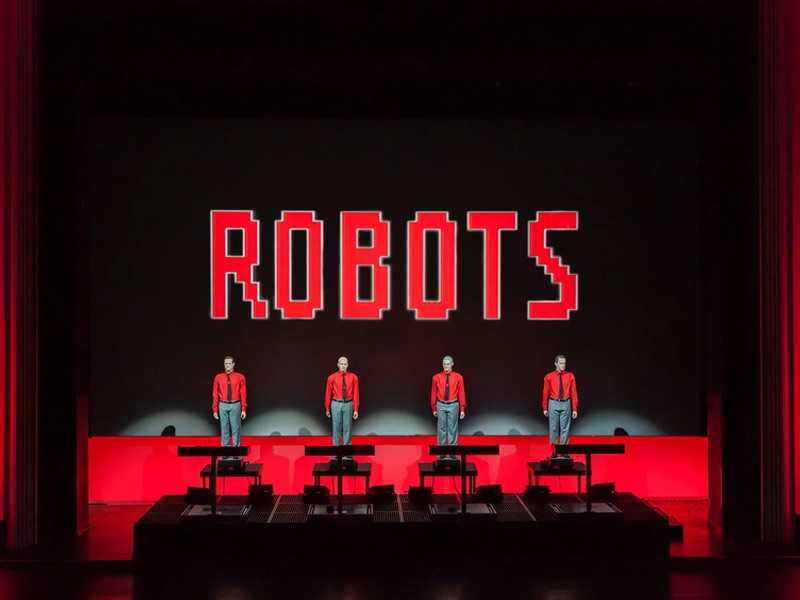 Kraftwerk lead the electronica on August 20th at All Points East.

After a heady first day with sets from Gorillaz and IDLES among others, Day Two of the marathon All Points East Festival is handed over to Field Day, back in their East London home with some big guns of electronic music on the bill.

Carl Craig and Mr Scruff are on the more established end of the names, while Mary Anne Hobbs provided a blistering set on the 6 Music Stage (here throughout the whole festival).

Continuing their rise, Floating Points added the elegance to go with the groove, while Daniel Avery proffered a surprisingly heavy, ethereal yet break-beat filled-set over on the North Stage as the sun started to set.

But the big draws are, logically, the co-headliners. Without exception, everyone on the bill owes a debt of gratitude (at the very least) to electronic pioneers Kraftwerk, even if they opt to keep the bass levels at a minimum in comparison.

3D glasses were handed out prior to their set which, through no fault of their own, commences slightly too early with much of the first half still in broad daylight, but the effectiveness of the format is truly revealed once the sun has gone down.

While quirky glasses are festival staples of old, it’s still a sight to see everyone wearing the glasses in a crowd consisting of everyone from white-haired (presumably original) fans to those in more familiar attire of Hawaiian shirts and shorts.

Opening track Numbers opens with a countdown which increases in volume as the four current members (Ralf Hutter, Fritz Hilpert, Henning Schmitz and Falk Grieffenhagen) each take to their individual podiums and remain largely stock-still for the 75 minutes, allowing the visuals to do the work with their power to enthrall undimmed. The titular Robots reach out into the crowd, while the images for Autobahn very nearly provoke motion sickness.

Although it’s a career-spanning set, the quartet are still performing to a festival audience and so the first few numbers receive a muted response.

In fairness, the soothing tones of Computer World aren’t designed to incite euphoria yet still sound sublime, while the curious synths and beat of Spaceworld get the feet moving.

Yet it’s not until the mammoth Autobahn, which glistens as the sun finally retreats from view, that cries of recognition are heard, followed by a big reception for Computer Love, AKA The One Coldplay Sampled.

But it’s hard to escape the thought that a large majority of the crowd are waiting for a ‘banger’ (shudder) that just doesn’t come.

Mercifully, it thins out leaving the rest of us to appreciate the likes of a surprisingly moving Radioactivity (a chastening reminder of the problems of the 1970s aren’t a world away), an unearthly Trans-Europe Express or a grandiosely terrifying The Robots, all showcasing Kraftwerk’s relentless progression.

A perfectly judged closer (Musique Non-Stop) sees each member step away from their podium and take their deserved applause one by one like the professionals they are. Proof enough that you can’t put a price on class.

The same can be said for The Chemical Brothers, although when it comes to crowd-pleasers they oblige accordingly.

The likes of Block Rockin’ Beats, Go and Chemical Beats are all present and correct, but newer material such as their 2015 collaboration with Beck (Wide Open) and two untitled new songs more than hold their own.

Where Kraftwerk’s visuals were hypnotic, here the images on the screens can only be described as a visual assault. Dancing figures in neon, psychedelic explosions, dream sequences…it’s a sensory explosion, fitting for the duo’s headline slot and an able demonstration as to why they are the masters of their craft, 30 years in.