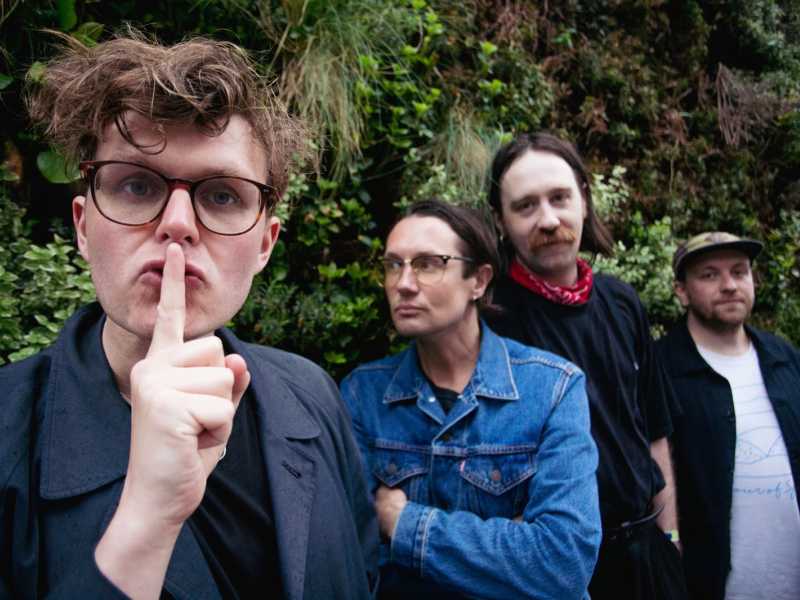 Click here to follow Live4ever’s Spotify playlist for the pick of the week from Yard Act and all our favourite new tracks.

Yard Act have posted the promo for 100% Endurance – the stand-out closer from this year’s debut album The Overload.

All our favourite characters from the Yard Act universe are present and correct in the video, joined on this one by actor David Thewlis. “I’ve told my agent I’m only doing Yard Act videos from now on, though next time on a tropical island or a big yacht,” Thewlis responds.

“I still can’t believe David got involved,” Smith adds. “I was such a fan of his work from Naked through to Fargo, and when I told James Slater he was interested in working with us he was so buzzing.”

Many of us secretly dream of turning the handle, escaping from the mundanity of our lives and, to roll out a cliché, following our dream.

Few of us do; stymied by fear of failure and the apathy which comes with a form of entropic compromise, routine remains routine. Not so Lea Sen.

Brought up in the outskirts of Paris, at only 20 she decided that she would move to London with no contacts, place to stay or command of the language in a bid to further a career in music she had wanted since growing up, listening to the sounds her producer father brought from his home island of Martinique.

Daniel Avery has confirmed the details of his new studio album Ultra Truth.

Released on November 4th, the album will find Avery concentrating on a different perspective when compared to past efforts, this time facing hardship head-on.

“My previous albums have all focused on the idea of music being an escape or a distraction from the world but that’s not the case this time,” he says.

“Justin captured rare studio footage of the recording of Doomscroller and we used it like a visual anchor, as evocative places outside the room keep creeping in,” Emily Haines says. “These traces of life on earth that appear and disappear throughout the song subtly mirror the shifting moods of the music.”

Formentera, the band’s eighth studio record, is out on July 8th, its title inspired by the Balearic island which had come to epitomise, for them, the dream of lockdown escapism.

Zola Jesus has collaborated with director Jenni Hensler on the video for her latest single The Fall.

“Working with Jenni Hensler as a director was such a soul-feeding experience,” Nika Roza Danilova aka says. “She’s someone I’ve been collaborating with for ten years, and a dear friend to me.”

“I value her own artistic perspective so much that at some point I realized there was no one else I could trust with my vision. We connected on an emotional and spiritual level regarding the intent of the song, and then I handed it over and let her make her magic.”

When one thinks of Brighton it’s always as a sunny place, the ocean glistening and the sand blindingly bright in the sun.

But, like any city, it has dark secrets lurking in corners, down side streets and in basements.

Like Tunnel Visions: beginning life as a three-piece, this circus of tricksters have evolved to become seven, their sound a seedy fusion of garage rock and classic British psychedelia. This maiden EP is one part of a story, or experience, based around the dominance of dreams in both day and night.

Goose have posted their new song Arrow ahead of Dripfield’s release next month.

The band’s third studio album is out on June 24th, and this latest cut will be familiar to fans having been a live favourite since 2019.

“It took us months of messing with the arrangement to finally dial it in,” Anspach continues. “And then in classic ‘Arrow’ form, once we hit the studio, it changed it again.”

Unloved – Jade Vincent, Keefus Ciancia and David Holmes – will release The Pink Album on September 2nd and are previewing it with ‘Mother’s been a bad girl’.

“In my head, ‘Mother’s been a bad girl’ is a tale of duality, searching for authenticity,” singer Vincent says.

“It slips effortlessly from the point of view of those watching – surmising, to those judging – cheekily chanting, Mother’s been a bad girl over and over, all sass, steeped in tradition, and ending in the final words of the dignified matriarch, regaining her composure, Are you truly certain you can handle me?”