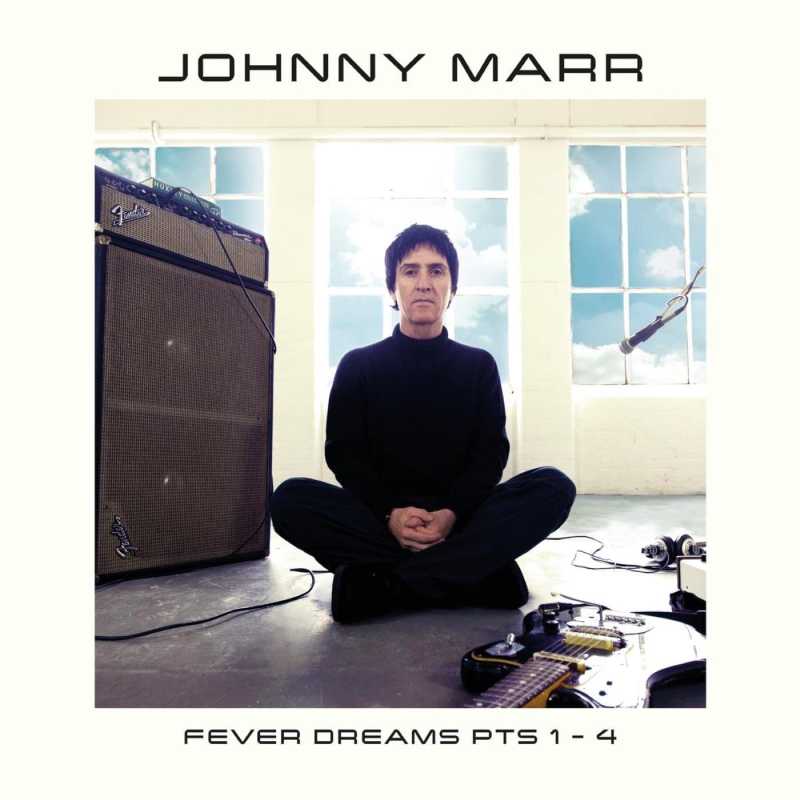 To get this out of the way; Johnny F*****g Marr is one of the all-time greats.

This is without question; he’s lauded by his peers (of generations above and below), adored by his devoted fanbase and respected by the media.

He manages to straddle all three with equal grace and poise while also being one of the good guys. The Mancunian legend has even helped make James Bond songs cool again after a decade (admittedly, a timespan that only covered two songs) of cloying, overwrought hogwash.

So he’s a legend. We know this. Yet there has always been a nagging feeling that his solo career over the last decade (not counting 2003’s Boomslang album, under the moniker Johnny Marr + The Healers) has been indulged rather than revered in order to justify his live shows, peppered as they are with numbers by The Smiths and Electronic.

Fever Dreams Pts. 1-4 (released in two formats, one double album and four EPs – it’s all very confusing) should put that attitude to bed.

A double album can raise alarm bells through fear of over-indulgence and padding, but Marr is way too shrewd for that. Yes, some tracks of its 16 are more inessential than others, but that’s the case with any release, and the quality level on display is impressively high.

Whether it’s the ‘electro-gospel’ rock of Spirit Power And Soul (Marr’s description, and can’t be bettered) or the shuffling, uneasy Ghoster, these songs could all be singles (more or less) and, as such, impact instantly.

The bludgeoning Receiver finds Marr on boisterous form, ratcheting his voice up to match the tension, while Hideaway Girl is unashamed in its brazenness, reminiscent of Primal Scream at their most confrontational.

Speaking of The Scream, Simone Marie pops up to provide vocals and bass on current single Night And Day, as catchy a song as Marr has put his name to as he rails against the modern world.

It’s one of the few times he does so; largely the album is about moving forward, as has always been Marr’s modus operandi. To be followed, as it is, by Counter Clock World, which is breezy optimism in audio form, is frankly just showing off.

We know him to be an optimistic man – this is his musical embodiment – but it doesn’t start so, his distorted voice only appearing one minute in as a simple but driving bass carries us towards him.

Known primarily as a guitarist (and obviously the guitaring is superb throughout if relatively sparse, but that’s priced in), little attention is paid to Marr’s lyrics, but there are multiple examples of his development across the album.

On the glorious All These Days he is, ‘talking with my shadow, escaping the century’, because, ‘in these days life is all perfect storms’, while he can’t help but be optimistic, despite the state of the world, noting on Ghoster that, ‘the way we’re burning I see love’. OK, it’s not He Who Must Not Be Named, but there’s an underrated humanity to Marr’s lyrics.

Marr is even bullish enough to cheekily crib the riff from Computer Love by Kraftwerk (their industrial motorik an influence throughout the album) but does it with such grace (that word again) that any outrage is time-wasting.

The whole album has a committed spark and a joie de vivre that’s rarely, if ever, found in a man approaching 60. Yet as good as it is, it’s hard to shake the feeling that Johnny Marr hasn’t quite made his definitive solo album yet.

Judging by Fever Dreams Pts. 1-4, we should brace ourselves.