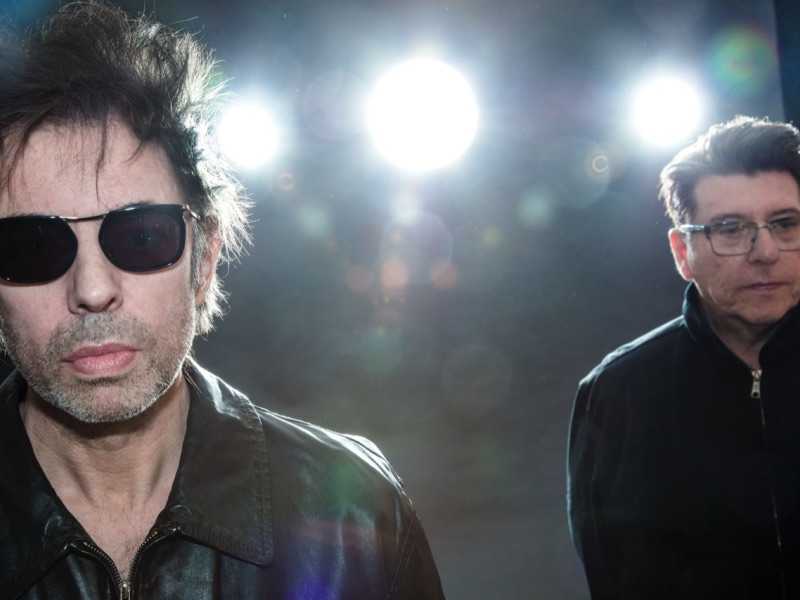 Never ones to undersell their legacy, Echo And The Bunnymen’s current tour is billed as, ‘celebrating 40 years of magical songs’, which seems harsh on early singles The Pictures On My Wall and Rescue (released in 1979 and 1980 respectively).

Of course, this is pedantry in the extreme, not least because the UK tour was originally scheduled for last summer, and more obviously because ’43 years’ doesn’t have the same ring to it.

Either way, it’s not an invalid claim. Eschewing a support band (instead giving the legendary Alan McGee the opportunity to show off his musical taste, playing everything from David Bowie to his new proteges The Gulps in a DJ set), it soon becomes apparent as to why: it’s a big setup that takes up the entire stage, with six players in total.

Although ostensibly now only made up of two full-time members (Ian McCulloch and Will Sergeant), there is only so much the pair can do and so the live players ably provide the scale that the songs require.

Looking resplendent in a trademark black overcoat, McCulloch rarely moves from his position at front and centre of stage, and asks for some help from the audience early on in the set.

He explains that he’s suffering from laryngitis (which may also explain the band’s late arrival on stage) and needs the crowd to sing along, although it’s hard to make out exactly what he says because of the aforementioned problem.

Knowing this, there are a few points in the set when McCulloch’s voice appears to waver, for example on the chorus to the rallying Lips Like Sugar, but it would be a spiteful soul who would complain. The atmospheric lighting ensures that the singer is rarely seen as anything other than a silhouette, negating any vocal issues by sheer presence.

Despite his lack of movement, walking quotation McCulloch is a compelling watch, but the real magic is happening to his right, Will Sergeant wrenching all sorts of sounds from his guitar, be it adding a snarl to Going Up or alternating between that and an indie jangle on Show Of Strength.

It’s an apt reminder of how large a hand Echo And The Bunnymen had in inventing the 1980s, and to watch Sergeant dexterously deliver an inch-perfect The Killing Moon is a joy to behold.

The first half of the set has its moments, as the shimmering, anthemic Rescue and the gorgeous Bring On The Dancing Horses set bars that are too high to follow even for the band, but from the midway point the set flies.

The divine Seven Seas heralds the start of a run of songs that have soundtracked lives, and the swaggering Bed Bugs And Ballyhoo gets a sluggish crowd moving.

Villiers Terrace is lengthened to become a medley, underpinned by a wholesome Hammond organ incorporating Roadhouse Blues by The Doors and the Bowie classic The Jean Genie, while Nothing Lasts Forever also morphs into Walk On The Wild Side, all of which sustain the crowd’s good voice.

New song Brussels Is Haunted sits well alongside such classics, an immediate rock song which pleasingly demonstrates that this tour isn’t just an exercise in nostalgia, but that the band still have a bright future.

Other bands would struggle to top a closing run of Lips Like Sugar, The Cutter and The Killing Moon, which sends the crowd into ecstasy, so wisely McCulloch and co. don’t even try, closing the gig with the majestic Ocean Rain, an exhalation after all the excitement.

McCulloch acknowledges that their last set in Bristol was below par (your reviewer can confirm they weren’t at their best), but this show rights that wrong in spades.

Echo And The Bunnymen are still fighting fit after 40+ years.

Tags:Echo and the Bunnymen, richard bowes