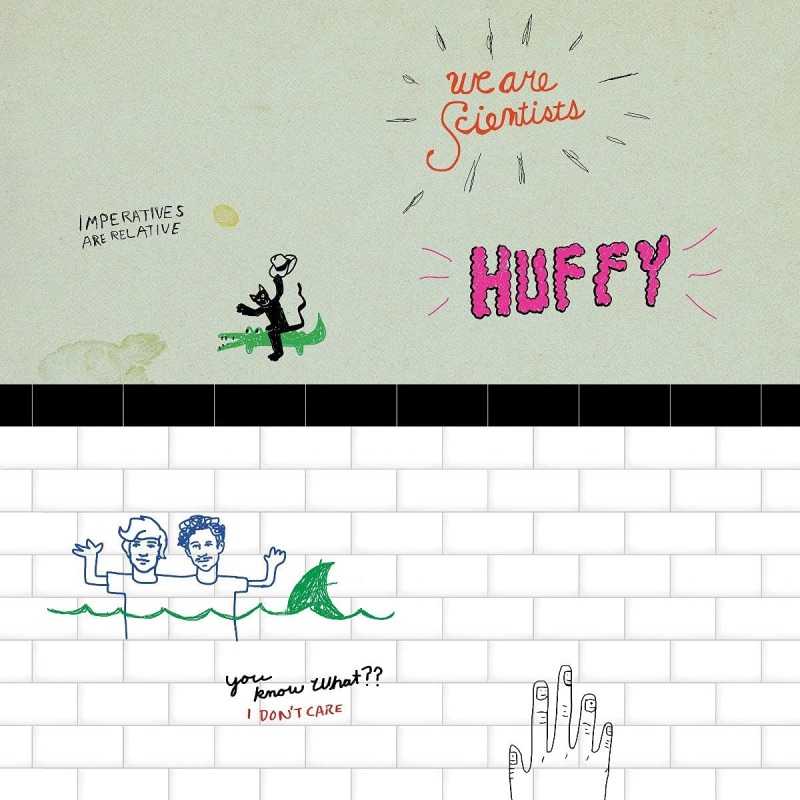 We Are Scientists had obviously taken our theory on board about the mistake of making your debut album great; in following up their, as they describe it, ‘first release’ Safety Fun And Learning with 2005’s With Love And Squalor, they proved that saving all the best bits for later was definitely the way to go.

Just as we thought the New York scene so viscerally celebrated in Lizzy Goodman’s Meet Me In The Bathroom was petering back out to a creative dead end, along the record the band still describe as their ‘proper’ debut came to kick everyone square in the pants, its knife-edge riffs and smart lyrical sweat making everyone at least briefly forget the Arctic Monkeys.

Problem solved, but problem still the same: following up greatness whether your timing was off or not is still very hard to do (ask The Strokes). Huffy is the fifth We Are Scientists album since you know what, and although that’s a fair amount of distance, the calls back to that creatively bomb proof moment still aren’t getting returned.

Now effectively just Chris Cain and Keith Murray, the duo’s response to the pandemic was to launch a topically-go-anywhere podcast series called Dumpster Dive, on which they dissected their own old material and, well, anything else they decided was suitable cud to chew.

The timing of bringing I Cut My Own Hair (included here) to the public was more fortuitous, but what had been in the first place a spiky anthem to outsiderdom became the documenting of an imposed trend.

If being out of your normal not by choice has affected Cain and Murray otherwise, Huffy doesn’t really tell that story; opener You’ve Lost Your Shit buzzes and bosses, huge drums being dropped from somewhere above, and if that and the bonus of an odd poo related lyrical gag are your things, then it’s going to be almost your favourite tune of the year.

Perhaps this is being too harsh. WAS have always served up their music with a side serving of humour, bad taste or not. This cod stand-up act makes it a little more difficult to take what is ostensibly a proper love song like Contact High at face value, although in execution it’s a crackling buzz of chainsaw pop searching for devotion in a newly found maze of legal highs.

This slick but angsty, turn-it-up-to-11 ‘burg is the pair’s wheelhouse, and you’re rarely allowed to forget it. Handshake Agreement ratchets up the funk a tad, whilst Pandemonium is meaner, a sort of what if Dave Grohl wrote a track for School of Rock’s cast.

If that’s a little academic (sorry – two can play, etc.) then the two best moments here also involve learning; Just Education turns up the sugar and delivers a chorus worth staying behind in class for, whilst the calypso opening of Sentimental Education gives way to some high end 80’s vibes and a reminder of why we’re all here in the first place.

It all works, with the exception of Bought Myself A Grave, which starts out cod-country like it gatecrashed the wrong party, pivots into MGMT, then dodges again inexplicably towards Daft Punk. Confused? You will be. Or more likely you just won’t pay it much thought.

They say don’t look back because that’s not the way you’re headed, and on Huffy We Are Scientists have admirably refused to do that. The real question is whether Chris Cain and Keith Murray see their future in reading, ‘Yeah, it’s okay, a few good songs’ every two years or not.

Tags:andy peterson, we are scientists