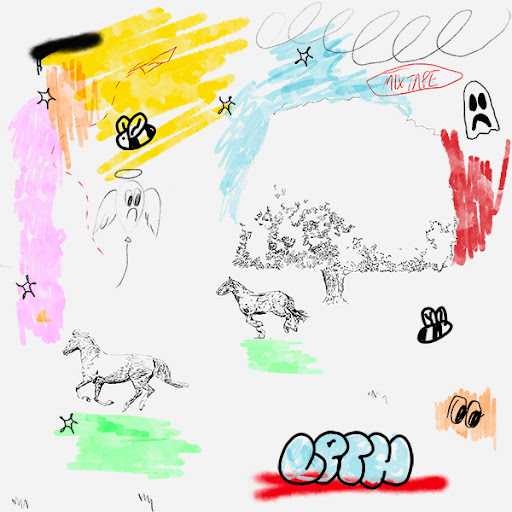 Full disclaimer – your reviewer is not sure what makes a mixtape a mixtape and not an EP. This compilation of songs doesn’t feature any tracks segueing into each other, or mixed together, therefore it’s hard to quantify what defines it as such. Perhaps it’s just the title of the release. Regardless, it’s a fine collection of songs.

Confusingly, LARRY PINK THE HUMAN is not a solo act but a collaborative project between Laurie Vincent (guitarist and songwriter of punk duo Slaves) and Jolyon Thomas, best known as a producer with a diverse list of credits including U2, Royal Blood and Kendrick Lamar. Born out of a desire to make music ‘for people to cook their eggs to’ rather than the incendiary rock music Vincent was known for, the pair released a string of singles in 2020 which immediately managed expectations. Sadly, the best of those singles, WASTED DAYS (INBETWEEN) doesn’t make the cut.

Unfortunately, nothing on M1XTAPE quite hits the same heights, with the possible exception of ELEVEN11_GTR-SONG (I don’t know why everything is capitalised either, apart from perhaps to make reviewers’ lives more difficult), but the intention of emotional connection is still conveyed. Tragically, Vincent’s girlfriend and mother to his two children passed away last year (Slaves’ winter tour of 2019 was cancelled so the guitarist could spend time with her) and, while it’s absolutely not for us to say that it informs the songs included (the press release refers to Thomas also having suffered profound grief), it’s hard to think otherwise.
As you will have ascertained by now, anyone expecting a re-tread of Slaves’ finest moments will be disappointed. This is unashamedly emotional pop music, with all the bells and whistles. Of course, Slaves are conveyors of emotion too, but frustration and anger is replaced with melancholia and yearning.

BISOUSXXX (‘this song is rebirth, death of an old self, it’s grief, it’s joy, it’s pain’ say the pair) sets the scene as Vincent sings plaintively, accompanied only by an acoustic guitar (complete with fingers scraping across the frets) in a manner akin to early Jamie T (the duo’s deference to 00s music is duly recognised in their interviews) before the track is elevated by pop instrumentation. Full of pathos (‘not forgetting, just learning how to live with it’), it neatly summaries LARRY PINK THE HUMAN’s mission statement in one song.

In truth, the actual music is primarily functional rather than spectacular, with very few surprises. The 1980s drums on NO WRONG NO RIGHT ensure the track pops and bounces along, while the pulsing electronica of SURFACING sufficiently carries the emotional intent of the track (‘I’m not bulletproof’, Laurie cries) with some added guitars. The breakbeat drums on both DO DO WILL WON’T and BREATHE convey a brooding intent, while the dramatic strings on closer FEELS LIKE HOME provide a sense of scale.

Yet the impact of the mixtape lie in Vincent’s lyrics and singing. Given the (presumed) context, lines such as ‘if you go looking you might never find what you had in mind’, ‘moments pass by at warp speed, don’t ever go quietly,’ and ‘when the weight gets too much, staying afloat isn’t easy,’ are real punches to the gut.

Although initially presented as a side-project adjacent to Slaves, some of Vincent’s wording in recent interviews (‘The Slaves image was something that I was maybe eight years ago – it’ll always be a part of me, but it was time to try something new,’ he said to NME recently) suggests that it may be some time before he picks up his guitar in anger again. If so, as the duo were the early shakers in this post-punk world we find ourselves in, it’s a crying shame but solace can be found, not least of all for Vincent himself, through this set of tracks (whatever it is).