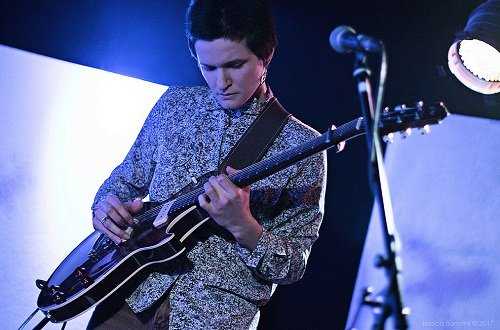 The always busy Adrianne Lenker of Big Thief has got another two albums in the pipeline.

The existence of this pair – ‘songs’ and ‘instrumentals’, both out on October 23rd – is largely thanks to the collaboration that was struck up in a remote setting with studio engineer Philip Weinrobe; “I grew really connected to the space itself,” Lenker explains. “The one room cabin felt like the inside of an acoustic guitar – it was such a joy to hear the notes reverberate in the space.”

“I had a handful of songs that I was planning on recording, but by the time Phil arrived I was on a whole new level of heartsick and the songs were flying through my ears. I was basically lying in the dirt half the time. We went with the flow. A lot of the focus was on getting nourishment from our meals.”

“We cooked directly on the woodstove, and we went on walks to the creek every day to bathe. I’m grateful that this music has come into existence. These songs have helped me heal. I hope that at least in some small way this music can be a friend to you.”