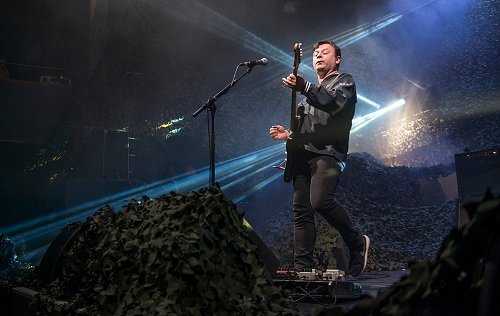 James Dean Bradfield has released two new songs which will feature on his upcoming second album recorded away from the Manic Street Preachers.

There’ll Come A War and Seeking The Room With The Three Windows are a part of Bradfield’s follow-up to 2006’s The Great Western, which will explore the life and death of Chilean musician, teacher and political activist Victor Jara through his own recorded and produced music and lyrics from the Welsh poet and playwright Patrick Jones.

It’s due later in the year, and has been announced shortly after the reissue of the Manics’ 1993 second LP Gold Against The Soul; “Relationships are complicated,” our review opens.

“For instance, if you’re the Manic Street Preachers, with three decades of collective strife and thirteen studio albums to your name, the notion of choosing your favourites amongst them, even subconsciously, is inevitable.”

“Gold Against The Soul has long held the status as the trio’s least adored release, principally because they’ve always been very vocal about it being so (although at Live4ever there’s a feeling that the anodyne Lifeblood is probably more deserving of the gong). Lukewarm ratings from its creators aside, this was also a record which equally suffered in the public’s eyes just for being the one between the group’s sky-scrapingly ambitious debut Generation Terrorists and their magnum opus The Holy Bible.”