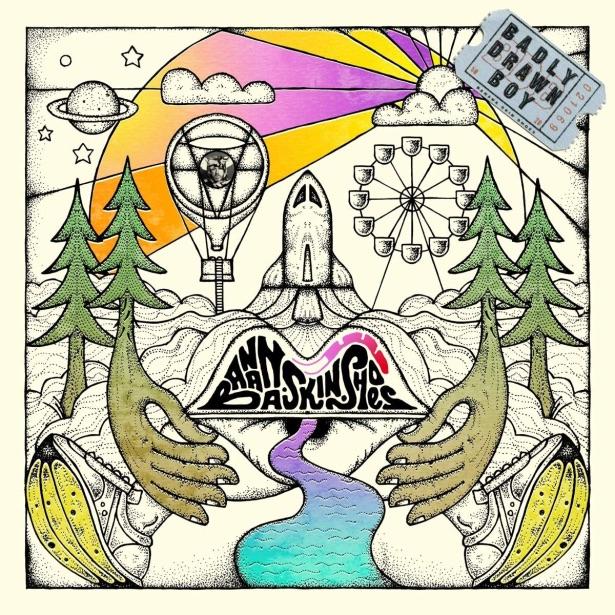 If the key to writing is to stick with what you know then Damon Gough has been doubling down on the advice: on Note To Self, which begins with the sound of a typewriter blending into a shuffling beat, the man otherwise known as Badly Drawn Boy is asking questions of the mirror; ‘Do I love myself/Enough to let somebody love me?/I convinced myself/That nothing good comes for free’.

This examination hints at the process the creator of the Mercury prize winning The Hour Of The Bewilderbeast has been through in the eight-year gap since his last release, the soundtrack to Being Flynn, a Hollywood movie never released in the UK. Since then, Gough has faced some very public trials, from separation to alcohol and mental health issues, ultimately resulting in a spell in rehab almost five years ago. Now long term sober, in a new relationship and father to a three-year-old, he needed no-one to tell him that the moment for a professional reset was long overdue.

Banana Skin Shoes didn’t happen overnight, Gough whittling down thirty possibles to the ultimate fourteen-track running order via a three-and-a-half-year process. The outcome was a collection on which he dispensed with the idea of a sonic consistency or theme, instead simply picking what he felt were the best tunes and then going with them.

What emerges musically is a bold, ambitious record, in places owing a debt to at least one of Beck’s incarnations, but that has a deeply human side which tugs on the listener’s sleeve. The titular opener is a case in point; bustling with ‘heroes return’ sort of energy, it’s mashed up beats and styles shooting off in all sorts of new directions.
Gough chooses wisely not to opt for a total distancing from his back catalogue, as I’m Not Sure What It Is and Funny Time Of Year stay connected to the approachably soulful folk on which his reputation was largely built. There’s absolute joy too in Tony Wilson Said, a pride-filled tribute to the late Factory label maverick and the modern spirit of Manchester which he made a legendary contribution to.

Still though the main topics are people, their inter connectedness, healing and new beginnings. I Just Wanna Wish You Happiness is a look back at a relationship breaking down, but forgiveness and warmth afterwards, while closer I’ll Do My Best turns the other way, bravely facing an unknown future.

The life changes being written about are profound, but elsewhere there’s a lightness of touch that makes smiles and head nodding easy, as I’m Not Sure What It Is, Fly On The Wall and Is This A Dream? cement the ‘new’ Badly Drawn Boy’s reputation for smart, emphatic pop.

It’s not easy to write about yourself and not be indulgent, especially when during the last decade life’s pretty much unloaded on you, but Banana Skin Shoes manages to make you care and sing along too, Damon Gough proving on it that time is much more than just a healer.