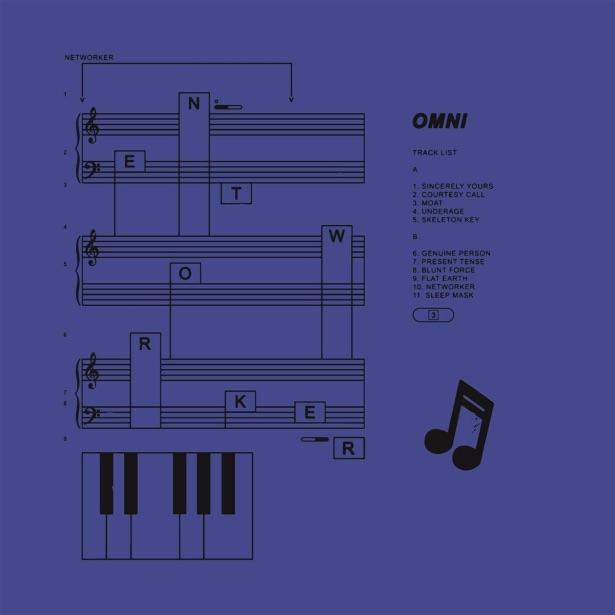 Hiring a cabin in the woods is sometimes a bad idea, but when Omni – Philip Frobos on bass/vocals, Frankie Broyles on guitars/drums/keys plus long-time collaborator Nathaniel Higgins – decided to re-group for their third album, they pitched up at a place in Vienna, Georgia built by Broyles’ grandparents in the 1940s.

Writing and recording between tours, the trio have taken a calculated step forward from the material on 2016’s Deluxe and Multi-task, released the following year. To do so rather than stay lined up with the post-punk aesthetic of before, Networker has a subtly wider field of view, opener Sincerely Yours a marker for this more relaxed, sleeker feel – even having time for a nano-guitar solo.

Isolating yourselves doesn’t make the world outside go away however, and at least some of Networker takes the spill of modernity on with conviction, the album’s title itself a reference to our obsession with being a node, while the otherwise seventies leaning Skeleton Key, with lines like, “Are you dreaming of the stranger that turns you on?”, guiltily looks at our 2D love lives.

There are still no-frills moments, with three of the tracks clocking at less than two minutes. Moat is spiky and riffed up but the impression is that another verse would unlock it fully, the title-track sees Broyles’ thoughtful keys come to the forefront, while in the debit column the jam-sounding Blunt Force veers into improv territory, never adding up to much more than an unfinished idea.

Relative failure is of course inevitable when heading out in half a dozen new directions. Reassuringly, in places the trio also turn their experimentation into bona fide alt-pop nuggets, the jagged but funky Courtesy Call abandoning lower-fi for melody and Genuine Person – once overcoming its odd time signatures – flits between post-rock and a charming dorkiness which remains the band’s stock in trade.

That’s as far regretfully as the contrasts take us. To Broyles & co.’s credit though, there’s a sense of writers learning how to refine their experiments as time goes on: Flat Earth contains some of the backwards scanning references of older work (Wire, Pavement) but still sounds like way more fun, an amalgam of positive and open threads which the expansive closer Sleep Mask also uses to great effect.

Sometimes you need to get away from it all to make a fresh start. Whilst made off the beaten track, although Networker rarely finds Omni in scenes of even mild peril, It’s a statement of how much its creators were willing to risk in making it.