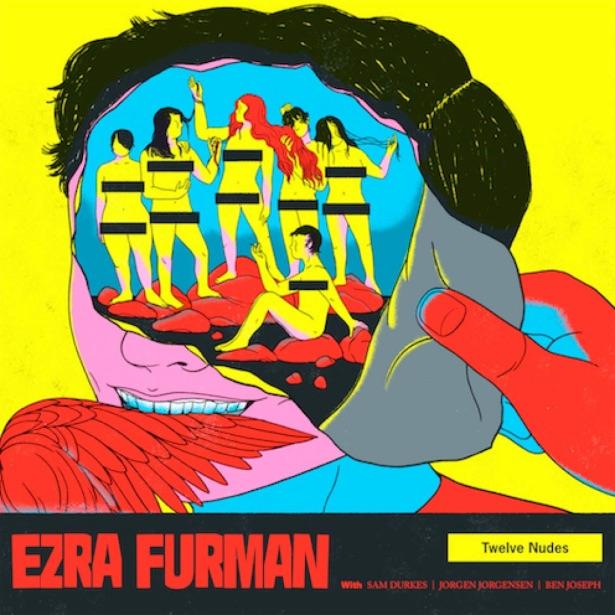 Twelve Nudes is different. Which is saying something considering Ezra Furman’s ever-shifting back catalogue.

You could play with its title and say it’s stripped-down, but that’s not why. So what’s different this time? Well, for one thing it’s lean. Clocking in at under 30 mins, there’s absolutely no fat or gristle anywhere. Good or bad, every track pushes its envelope as far as possible as quickly as possible. And that’s a joy, even if the moment isn’t tickling you.

The record opens hard with Calm Down aka I Should Not Be Alone. It has echoes of Alternative Ulster by Stiff Little Fingers with a sprinkle of The Stones’ ‘woo-woos’. As a statement of intent, it works and sets the scene by telling listeners to forget what you know as all bets are off.

So what can be expected? Well, you’ve got folksy glam-rock on Transition From Nowhere To Nowhere, impassioned and compelling, and one of the few ‘serious’ moments on the record. Or there’s the brutal energy and insanity of Rated R Crusaders. It’s frenzied and fun, owing as much to Devo and Oingo Boingo as Minor Threat and Black Flag. Furman pours in as much fury as farce, making something that gets better as it gets sillier.

Trauma, on the other hand, is bold, melancholic and anthemic. It sits at the heart of the album anchoring the record and giving it lasting resonance beyond the blasts of insouciance that surround it. Then Thermometer, an unusual moment. Taking the listener by surprise considering what came before, the best part is it’s a silly idea played with absolute commitment, making it far more fun than it probably has any right to be.

Another track that pulls a similar trick is I Wanna Be Your Girlfriend, a wonderfully off-kilter deconstruction of classic Doo-Wop and Rock’ n’ Roll tropes. But the slightly squiffy, unbalanced sound is what really reverberates. In America feels akin to The Replacements and Mission To Burma, and others, wallowing in the apathy and lo-fi intensity that defined those bands.

Then the album bows out with What Can You Do But Rock’ n’ Roll. Again there’s punk (Stiff Little Fingers, The Damned and more) lumps splattered all over the place. What’s more, it packs a real punch with the requisite number of punk hairs on its proverbials. If only all records went out like this.

Obviously not everything works, there are a few minor missteps along the way. Evening Prayer aka Justice somehow sits aside the rest of the record. Slightly over-baked, feeling almost Proclaimers-like. My Teeth Hurt has the 80s sound down but the humour slightly misses its mark. However that’s okay, because Furman’s pushing buttons whether you like them or not.

And that’s what sticks. Twelve Nudes is a ridiculous, angry and earnest record that tries so much and achieves much more. Constantly veering from one idea to the next, never looking for the easy option or taking it. Indebted to 80’s alternative, Furman spends the entire album digging deep into what made that decade so unique and individual, leaving a record that’s fun, dumb and full of drums.

It’s heavier, bolder and louder than expected, but if this is anything to go by for Furman expectations are simply there to be played with. Only he’s not playing with them, he’s blowing them to smithereens and laughing in your face while doing so.

What’s not to love about that?