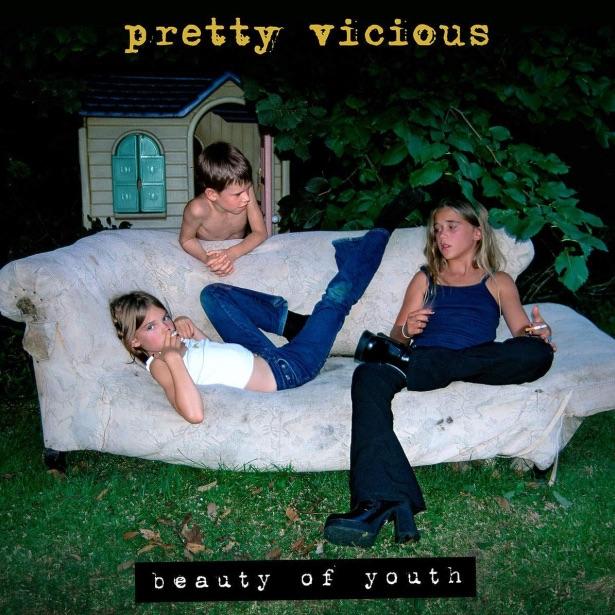 This album arrives on your music player of choice with a lengthy tale attached. Are you sitting comfortably? Then we’ll begin.

The Welsh four-piece released one track, Cave Song, via Soundcloud in late 2014 to the acclaim of many including DJ Zane Lowe, then at Radio 1. A bidding war amongst the major labels in the UK ensued, the band eventually signing to Virgin EMI in a deal rumoured to be worth more than £500,000, weeks after playing their first gigs.

Over the course of 2015, in between writing and rehearsing, several high profile support slots (including with Noel Gallagher and Manic Street Preachers) kept their profile up yet, despite releasing four singles during the year, Pretty Vicious struggled to find a producer who could harness their sound.

They settled on Owen Morris, the man responsible for the first three Oasis records, and as a fellow Welshman and architect of the wall of sound that was those albums’ key template, it seemed a match made in heaven. However, over a period of several months and a number of studios on both sides of the Atlantic, it became apparent there was a clash of personalities with the famed producer, and as a result relations with the label became strained.

Eventually band and label parted ways with no fruits of labour to bear. Unencumbered by outside pressure and finding a producer who was able to harness their energy, Pretty Vicious finally recorded their debut album in late 2017, and then found a more suitable home with the Big Machine Group. If that tale wasn’t enough to fill a decent rock biography, owing to personal issues singer Brad Griffiths has, hopefully temporarily, stepped back from the limelight, leaving the band with the unenviable task of promoting their debut without their frontman.

So the pieces are in place for the tale to become legendary, but what of the album itself? Does it justify the abnormally long wait as the document of working class life that was promised, or has the relentlessly brutal conveyor belt of British rock strangled them in their cot? The answer, as ever, is somewhere in the middle.

The music itself is mighty; straight out of the traps Griffiths delivers a larynx-shredding vocal on These Four Walls and it’s all systems go. No One Understands is the youth anthem they always promised, while Force Of Nature pilfers from Muse at their heaviest.

Someone Just Like You bears more than a passing resemblance to early 21st century hopefuls The Vines, and Little Molly is full on epic, grandstanding rock. Best of all is Something Worthwhile, which sounds like the song Catfish & The Bottlemen have been trying their damnedest to write. They may not be quite so young now, but to have such a broad palette at such an early stage suggests a real willingness to push themselves.

On the other hand it all sounds timeless, which in five years’ time will be a blessing, but when indie rock is currently harnessing the power of punk and new wave and is bristling with an energy and directness it’s been missing for a long while, Pretty Vicious could be at risk of being out of kilter. Idles, Fontaines D.C., Shame and many others are leading the charge to be in tune with the times and it remains to be seen if there’s room at the inn for less apposite, but as equally passionate missives.

What’s most promising about this debut is that not one of their early singles is included, suggesting they may have more to come and, once Griffiths hopefully resolves his personal problems and with everything on the business side now settled, it could be even better.

This collection of sneering and soaring mission statements augurs well for that.