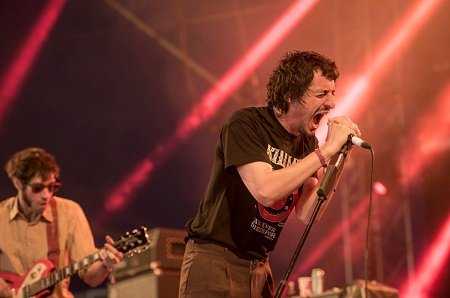 Fat White Family will stay for four nights at Earth Hall in London as part of a UK tour which has been arranged for the winter.

In support of this year’s Serfs Up! album, the band have detailed November shows in Leeds, Edinburgh, Glasgow, Newcastle, Kendal, Liverpool, Cardiff, Birminghan and Brighton before that London stay in early December.

“The whole album sounds like it has been given a polish after being bolted together industrially; I Believe In Something Better pulses to accompany Lias’ whispering intensity over drunken banshee wailing and wonky synths,” our Serfs Up! review reads.

“Fringe Runner features crashing guitars and an addled bass line which add to the drama inherent in the song. It sounds like late-90s Blur as produced by Brian Eno in Berlin and is by far the most interesting thing they’ve ever done.”