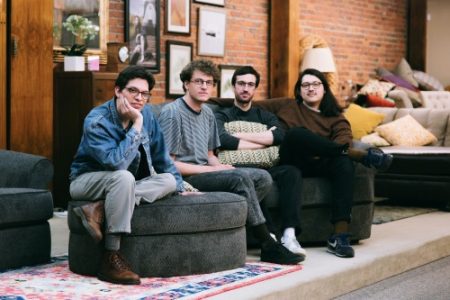 Versing are releasing 10000 – their first album on Hardly Art – on May 3rd and following previous singles which include the superb Tethered, have now uploaded a video for Renew.

The song is about ‘taking time to care for yourself even when things are all weird and f***ed up’, according to frontman Daniel Salas. Big influences on the album comes from the abstract rock of bands such as Cocteau Twins and Wire as major inspirations. “9/11 messed up a lot of things culturally, including music,” Salas has said.

“It engendered a deep social conservatism and nationalism that meant the chaotic and unpracticed sounds previously common in rock music had to go, in favour of tighter playing, more simplistic subject matter, and super clean production.”

As well the wider 21st century rock world, Salas is also keen to differentiate Versing from the mindset which he believes pervades in their home city of Seattle. “There’s a ‘let’s just f**k around and see what comes out’aspect of what we do,” he concludes, “which I think is uncommon for Seattle bands.”