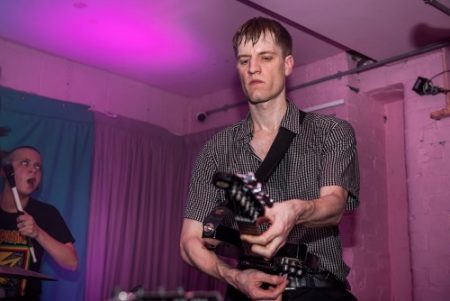 Bodega playing the first of two nights at YES in Manchester, Feb 2019 (Gary Mather for Live4ever)

With the ‘snotty, angry, silly, ridiculous’ record, as Live4ever described Endless Scroll, now into its second year, Bodega are continuing to work hard on the road and have been touring the UK again this month. When the tour hit YES in Manchester on Sunday for the first of two nights at the venue, Live4ever’s Gary Mather was there for our gallery.

“But the best thing about the album is how, while doing this, it still manages to avoid every punk ideal by actually being passionate, earnest and frank too,” our Endless Scroll review continues.

“What the band say throughout might be funny, might be a little near the mark, but it’s always honest. And what makes this even more exciting is they speak their truth with utter abandon on an album of intense energy and humour.”

Still to come are shows in Leeds and London before they return in March for more UK dates.