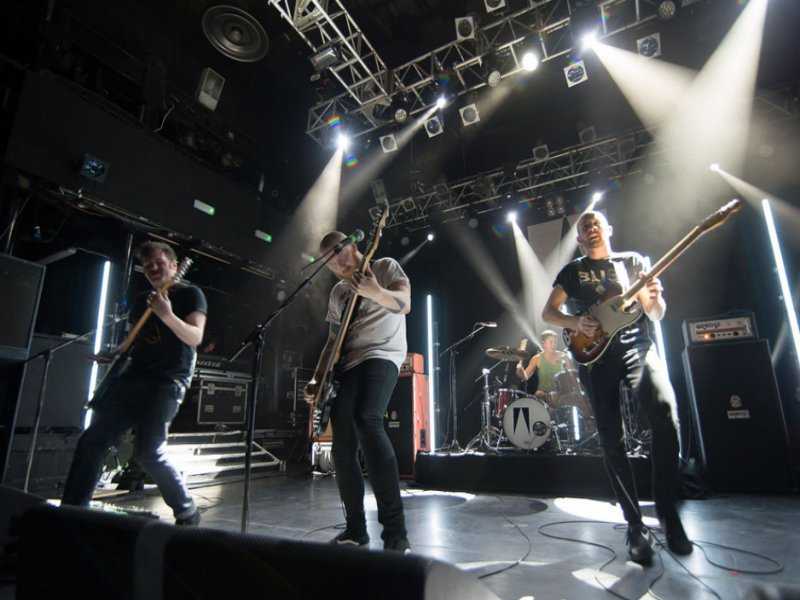 After what’s felt like way too long in the margins, with their fifth album The Endless Shimmering Irish quartet And So I Watch You From Afar emerged with one of last year’s most intriguing and emotive albums – and all without the use of words.

Recorded in just a few days whilst the band were snowed into their Rhode Island studio, the music they delivered was filled with intricate, layering and rich musical textures which deservedly made it their most successful release to date – both critically and commercially.

Live4ever caught up with guitarist Rory Friers and drummer Chris Wee to reflect on The Endless Shimmering’s impact on both them and their fans, why it struck such a chord and how it might affect their future work as this week they prepare for their first Australian tour with dates in Sydney, Melbourne, Brisbane and Perth.

The album’s out there, being listened to, being reacted to, and you’ve toured it all over Europe. How do you think it’s been received?

RF: I think t’s done as we suspected it would. There’s always a temptation to make an album that instantly you get it. We wanted to make something a bit denser and that you had to commit to a bit more. It feels like it’s still growing. Sometimes you can put something out and it has its moment and then it’s onto the next thing. I think people liked it when they first heard it and there’s a lot to get through; they have to stick with it and I think they are sticking with it. It feels like our most ‘listened to’ record.

It feels like a record of two very different halves, yet together they complete something remarkable. What was the thinking behind sequencing it like that?

RF: We spend a lot of time about how an album’s going to flow; it’s important to us to think about listening to it from start to finish. There was a temptation to break it up, but we thought f**k it, the tracks all really speak to each other. It was just like, ‘Let’s make this side A and this side B, this is the hefty side and this is the lighter side’. But we made sure that there were bits and pieces of riffs that linked them together, some connective tissue that would make it feel like it made sense.

RF: Things like motifs; sometimes we’ll repeat little bits that appear in other songs – at the very end there’s a chord section which is a reprise of the last song on the album. We try and make people feel that subconsciously they’re recognising things, like old friends coming to see them. For this record we just went with our gut the whole time though and tried not to second guess ourselves too much.

You said you wanted these songs to sound as amazing as possible as a live band. Were the songs recorded live, in that process?

RF: Song by song, drums and bass were pretty much live. We had the entire thing recorded in four days and then we had it mixed in another five days. We knew exactly what we were going to do and we just went in and did it.

So it was two, three takes on a song and then you were recording?

RF: Yes, the speed Seth (Manchester, the album’s engineer/producer) can get on your wavelength, to keep that momentum going when someone’s playing really well is a skill in itself.

Did you sit down with him before you started?

RF: There were lots of emails, but more importantly he had the demos, and these were not rough demos, we had made the album from start to finish so it was very much ‘here’s our template, here’s the speeds that we want to play at’. He wasn’t the only producer we spoke to, but we felt he really got what we were trying to do.

CW: The reason the album worked so well was because of the amount of time we took writing the songs, but everything else – going to Pawtucket, the isolation, the whole experiential thing – seeped into it as well.

It felt like you’d discovered through this a new dimension to your sound.

RF: In terms of the sonics, that’s down to Seth. It was the perfect marriage of us being completely comfortable in playing all of our parts, to play with finesse and play hard, and then having someone with the expertise to capture and mix that. All these things stack up. All these things make it sound different.

Can you see yourself taking that approach again?

CW: I certainly don’t think we’ll rush the next album. Being so well rehearsed, that was the enjoyable thing.

RF: It’s a lot cheaper this way – nine days versus sixteen weeks for the previous one. We’ve been releasing an album every two years to the day, but this time we held off and it feels like there was so much benefit in letting the songs mature and finding everything that fits together.

CW: It’s like every record, you gather all the good stuff off it and you keep that. We’ll approach writing the songs differently, but I can’t imagine we’ll go into the studio wanting to go all Pink Floyd!

There’s a sense of purpose about this record; for an album with the least amount of lyrics you seem to be communicating the most. What was the emotion around this album?

RF: A lot happened throughout the period of writing it. We’re not going to talk in detail about it all, we consciously decided that we didn’t want to reveal anything about this album personally because it’s probably the one that’s most steeped in all that stuff. It’s for everyone else to take out what they need from it.

It’s by far the proudest moment of anything I’ve done musically and it became the most enjoyable to do.