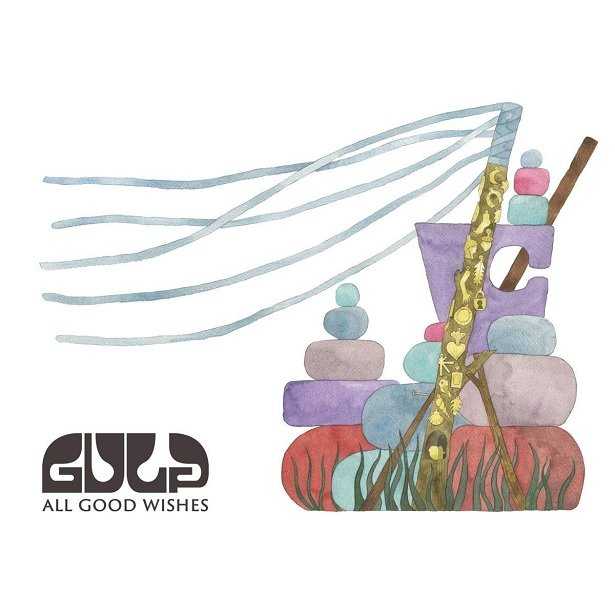 Shall we take a trip? Gulp – a duo for the unfamiliar made up of sometime Super Furry Animal Guto Pryce and singer Lindsey Leven – have certainly been on one both physically, after relocating from Cardiff to the east coast of Scotland, and cosmically via a musical satchel that picks and mixes from many of the last century’s more fried musical plots.

Released in 2015, the pair’s debut Setting Sun went against the year’s generally dreary, post nu-folk grain by seeming consciously unburdened, happily bearing a torch for cracked hedonists and chilled out rave kids alike. Wisely, they’ve chosen to see the formula’s languorous upsides with All Good Wishes being only shades different to its predecessor.

So, as not to waste time, opener Search For Their Love packs every reason to be a fan into just over four minutes; if the Balearic melodies, Leven’s Barbarella-in-control vocals and a lyric which seems to be about being into it by being slightly out of it aren’t enough to sell this whole thing, it may be this just isn’t going to be your bag. But, if you liked that, you’ll love songs like Morning Velvet Sky – a kraut pop banger which out Goldfrapp’s Goldfrapp, whilst Spend Time Right Here With You’s opening line of, ‘We walk along among the sunflowers’, is the gateway to a love affair that comes in mottled frames and embellished with a wide eyed devotion.

The couple are perhaps unsurprisingly fascinated with the likes of Ennio Morricone and Lee Hazlewood, and there’s an omnipresent cinematic vibe throughout even if the Odeon in question is now a multi-story car park. Leven sounds untouchable at times, the chanteuse of Beam fading from shot to shot in monochrome, subtitles failing as the warped mid-section bows deeply to Femme D’Argent-era Air, a blurry over exposure which is repeated on the title track.

That’s the thing though about living out of focus, that it’s hard to connect with objects that aren’t blurred themselves. Zoom closer though and things are just as mysterious, the positively earth bound by comparison After Rain a crystalline ballad, but the finest moment is in the almost-dancefloor freshness of Claudia, a ray of sunshine refracted through the waves of a place you’d most like to go to but don’t know even exists.

The weary may be jaded enough to point out that this narrowness and blanket mono-emotion effect has some pretty obvious drawbacks and true, the pair have seemingly run out of ideas as we reach the free-wheeling disco jam of closer Silver Tides, but All Good Wishes has for those always-backpackers worked its magic long before that; a duo fascinated by movement and dreams have left the door open to a world without locks, numbers and keys.

And after all, they say travel expands the mind.