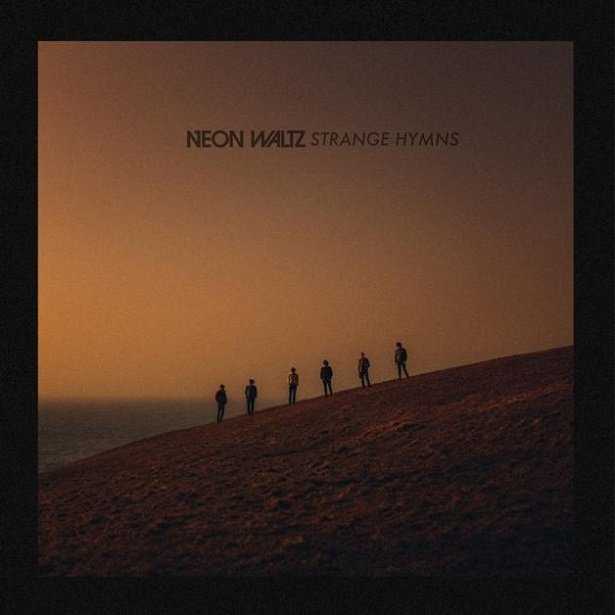 My place is about 350 miles away from the towns of Wick & Thurso which lie at mainland Scotland’s extreme northern edge, so you make assumptions – stuff about the pace of life being slower up there, that the lines of communication to the London-centric music industry are stretched almost to nothingness, or that the often witnessed Aurora leaves a lasting, profound impression on the retina.

At least some of these would appear to be true if the experiences of Caithness-based sextet Neon Waltz are anything to go by. Tipped as a band to watch in 2015, their bubbles came to the surface with support slots for the likes of The Coral and Noel Gallagher, even if they didn’t quite. Compounding this almost-ness, it took until the late summer of 2016 for Strange Hymns to be made, and now nearly another year for it to be released; the cynic in us on hearing about this perhaps down shift in momentum might point southwards to the suits and intone, “Out of sight, out of mind”.

This matters, not because there aren’t a hundred stories from musicians of bad luck and bad timing like it to be heard every day, but because Strange Hymns is a debut record in every conceivable sense; bold, uncomplicated and full of the confidence of young men who have yet to crushed by expectation or doubt.

Some of this brio is owed to singer Jordan Shearer’s voice; pipes strong enough to carry the band’s frequently epic, unfettered indie rock, which together they render up on a grand scale. Opener Sundial sets them off at a gallop, starry eyed reverb, E-Street drums and highway ba-ba-bas putting the wind in everyone’s hair, road music from where there is nothing but the bigger sky to sleep under.

The innocent streak it betrays runs right through Strange Hymns, whether it be through Sombre Fayre’s winter frost, or stoking the fire high to melt it, the music a rickety excerpt from an alternative Pet Sounds, or in the gentle condemnation of their critics on Dreamers, Shearer, exhorting latter day minstrels to, “do what you like, while you can” whilst shake-shake-shaking it off.

Not just happy to be taking part then, the six-some unashamedly wear some obvious older influences, cousins possibly of The Twilight Sad (without the angst), or even Mull Historical Society (without the whimsy), seemingly unaffected by the stage fright many people who dare to pick up a guitar these days are prone to. Is there something archaic here? More timeless probably, the reel of closer Veiled Clock the sort of hyper extended folk which takes its cue from a familiar blend of archive 20th century tropes, echoes from an imaginary Highlands rust belt.

Fans of the new might point to Strange Hymns’ catch all, rear view aesthetic and make some noises about it being either too clever or not intelligent enough, but Shearer and co. are best when they care less, the cherubic stomp of Bare Wood Aisles joyous, whilst the self prescribed pandemic of the soul on Heavy Heartless is a doubtless unnecessary key change away from thunder.

A long way away from us, on Strange Hymns Neon Waltz prove that distance and time are both relative. Young enough to know better and with taste makers far down the road, prepare to hear exactly what they want you to hear.